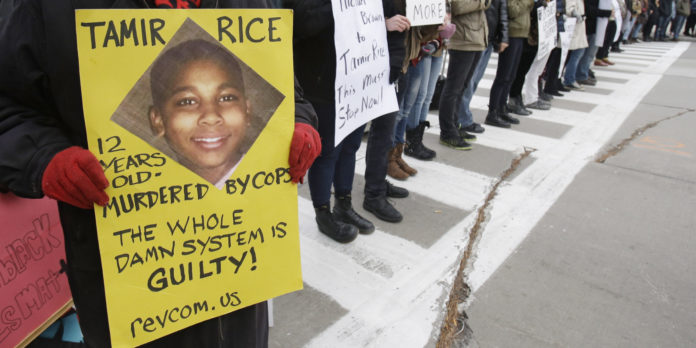 The 911 dispatcher who took the call that ultimately led to the death of a 12-year-old black boy shot by a white police officer has been suspended for 8 days for her role in the killing.

On March 10, Cleveland Police Chief Calvin Williams filed a disciplinary letter against dispatcher Constance Hollinger that said she violated protocol the day of the fatal shooting of Tamir Rice.

Rice was killed outside a Cleveland recreation center in November 2014 within seconds of officers Timothy Loehmann and Frank Garmback spotting the boy, who had been playing with a pellet gun.

In the 911 call to Hollinger, a man claimed he saw “a guy” pointing a gun at people. But he also clarified that it could just be a kid with a gun that might be “fake.” City investigators determined that Hollinger did not pass off that relevant information to another dispatcher who sent Loehmann and Garmback to the scene.

Neither Loehmann ― who fired on Rice ― nor his partner Garmback were ever criminally charged. They might still face discipline within the police department that could lead to their dismissals.

In a statement, the boy’s mother, Samaria Rice, said Hollinger’s eight-day suspension was “unacceptable,” according to CBS News.

“Eight days for gross negligence resulting in the death of a 12-year-old boy,” Rice’s attorney, Subodh Chandra, said in the statement. “How pathetic is that?”

Last year, Cleveland agreed to pay the Tamir’s family $6 million to settle a federal civil rights lawsuit. The city, however, made no admission of wrongdoing.