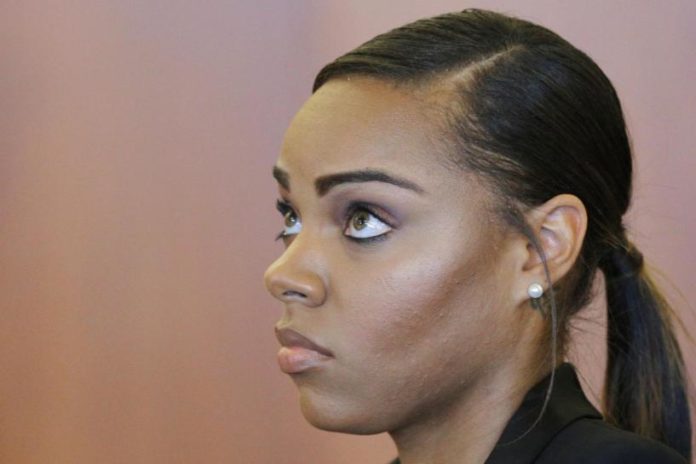 The first part of a two-part interview with Shayanna Jenkins-Hernandez aired Monday on the “Dr. Phil ” show. The second part is set to air Tuesday.

Jenkins-Hernandez told host Dr. Phillip McGraw she doesn’t think the former New England Patriots tight end’s death April 19 was a suicide, as authorities have ruled. She said he was upbeat in their last telephone conversation before he was found hanged and there was no indication he was suicidal.

“He was very positive,” she said.

She said she thought the news of Hernandez’s death was a “hoax” and some cruel person was playing a trick on her. She didn’t offer an explanation for Hernandez’s death if it wasn’t a suicide and said she had no reason to believe anyone would want to kill him.

The death of Hernandez, who grew up in Bristol, Connecticut, and played football at the University of Florida, came days after he was acquitted in a 2012 Boston double slaying. He was serving a life sentence in a 2013 killing. A judge recently erased the 2013 murder conviction against him because he died while he was appealing.

She answered questions about the legitimacy of a suicide note Hernandez wrote that was addressed to her.

“It was addressed to Shay, instead of babe or bae,” Jenkins-Hernandez said.

She said she thought that was “odd” and the letter did not seem personal or intimate.

The state police report said Hernandez wrote “John 3:16,” a reference to a Bible verse, in ink on his forehead and in blood on a cell wall. The verse says: “For God so loved the world, that he gave his only begotten Son, that whosoever believeth in him should not perish, but have everlasting life.”

A Bible was nearby, open to John 3:16, with the verse marked by a drop of blood.

Some inmates have said Hernandez had become increasingly spiritual during his time in prison, but Jenkins-Hernandez said the bible verse didn’t sound like Hernandez and he’d never mentioned it to her.

Part of the message to Jenkins-Hernandez also said: “You’re rich.” Those words have fueled speculation Hernandez left assets to her, but she said she thought about love when she read it and couldn’t speak to whether the note was a will and testament.