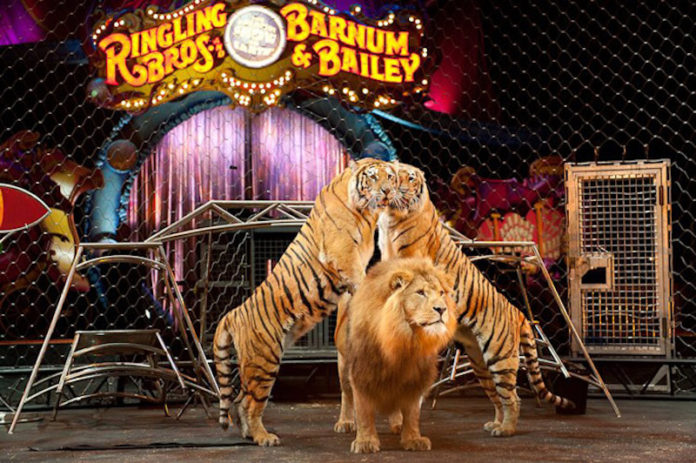 Animal Defenders International (ADI) has welcomed the announcement by Ringling Bros. Barnum & Bailey Circus to close its animal shows from May, citing declines in ticket sales after earlier announcing a ‘mood shift’ among their consumers .After decades of exposing the cramped, barren conditions with long periods of time tied up and chained with no freedom of movement and a brutal training culture, ADI believes that public opinion has ended the suffering.

Modern audiences now have many entertainment options and do not want to see shows where animals are made to suffer for a few minutes of entertainment.

Jan Creamer, ADI President, said: “After decades of exposing the suffering of animals in circuses behind the scenes, we are pleased to hear that Ringlings has finally bowed to public opinion – it was a mistake for them not to see the trend away from animal shows to human-only performances over a decade ago. Circuses can survive without the animal performances.”

Studies of the use of wild animals in traveling circuses show that in the circumstances of a traveling show, circuses cannot meet the needs of wild animals. Animals are confined in small spaces, deprived of physical and social needs, spending excessive amounts of time tied or chained up, shut in transporters and unable to move around.The abnormal, stereotypical behaviors seen in circus animals, rocking, swaying and pacing, indicate that they are under stress and not coping with their environment. ADI’s video evidence has shown how these animals are forced to perform tricks through physical violence, fear and intimidation.

ADI has led the campaign to expose the suffering and educate the public around the world, providing video evidence, prosecutions and expert reviews. 34 nations have reviewed the evidence and taken action to end traveling circus performances. Across 27 states in the US, 66 jurisdictions have already decided to either ban or restrict the use of wild animals in traveling shows, due to concerns about public safety and animal welfare.

ADI is supporting Representatives Ryan Costello (R-PA) and Raul Grijalva (D-AZ), who launched Traveling Exotic Animal and Public Safety Protection Act (TEAPSPA) in Congress last November. The congressmen have concluded that ending wild animal use is the only practical approach to deal with public safety issues and inspection and oversight problems repeatedly cited by the Office of the Inspector General (OIG).