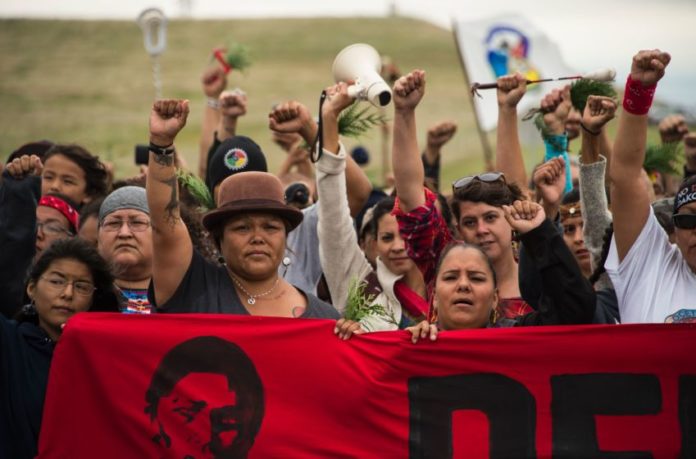 Federal authorities have halted construction of the controversial Dakota Access Pipeline amid growing protests that were expected to draw some 2,000 U.S. military veterans.

The Department of the Army has denied the final easement required for the $3.8 billion project to cross under Lake Oahe in North Dakota, it announced Sunday. Instead, it will conduct an Environmental Impact Statement to examine the impacts and explore alternative routes, it said.

“Although we have had continuing discussion and exchanges of new information with Standing Rock Sioux and Dakota Access, it’s clear that there’s more work to do,” Jo-Ellen Darcy, the Army’s assistant secretary for civil works, said in a statement. “The best way to complete that work responsibly and expeditiously is to explore alternative routes for the pipeline crossing.”

The 1,172-mile pipeline is being built to carry Bakken oil from North Dakota to an existing oil terminal in Illinois. Most of it is completed, except for a 20-mile section near the Standing Rock Sioux reservation. The tribe and demonstrators have raised concerns about the threat the pipeline poses to water and sacred Native American sites. The tribe has also argued, in a lawsuit to stop the pipeline’s completion, that the project violates federal laws and its environmental impact has not been fully studied.

“We wholeheartedly support the decision of the administration and commend with the utmost gratitude the courage it took on the part of President Obama, the Army Corps, the Department of Justice and the Department of the Interior to take steps to correct the course of history and to do the right thing,” he said.

The Standing Rock Sioux Tribe and all of Indian Country “will be forever grateful to the Obama Administration for this historic decision,” Archambault added. He noted his hope that the incoming Trump administration would respect the decision.

“My hands go up to all the water protectors who have stood up to protect tribal treaty rights and to protect Mother Earth,” National Congress of American Indians President Brian Cladoosby said in an emailed statement. “Thank you for Standing For Standing Rock.”

Within hours of the announcement, Jack Gerard, president and CEO of the American Petroleum Institute, a trade association for America’s oil and natural gas industry, called on Trump to “reject the Obama administration’s shameful actions to deny this vital energy project, restore the rule of law in the regulatory process, and make this project’s approval a top priority as he takes office in January.”

Energy Transfer Partners, the company building the pipeline, did not immediately respond to HuffPost’s request for comment.

Philip George, 37, from the Six Nations of the Grand River reserve in Ontario, Canada, was among the demonstrators gathered Sunday at Standing Rock. He described the victory as “bittersweet,” something “due to our people for the hundreds of years of genocide and oppression.”

“This fight is part of what’s going on here for centuries,” he told The Huffington Post. “I’m glad they denied the easement, but I don’t know how long this victory will last with Donald Trump being elected president. I’m not sure if he will respect our people and respect our culture. Money can corrupt a man’s heart.”

George added that he sees this as a small victory in the grand scheme of things and believes there is much more work to do regarding indigenous representation and nation-to-nation relations. “The federal government needs to respect our ability to govern ourselves, our land and who we are,” he said.

Lance King, 44, of Kyle, South Dakota, located on the Pine Ridge Indian Reservation, has traveled to Standing Rock twice to join in the demonstrations. His most recent visit has lasted two weeks.

King said he was “excited” and “happy” about the Army’s decision, which he sees as a “victory for the American people.”

“Everything was up in the air. I don’t think anyone saw this coming,” he told HuffPost. “There was a high rate of excitement and worry, so we didn’t see this ― but we stuck with our prayers.”

Attorney General Loretta E. Lynch said that in light of Sunday’s decision, the Department of Justice would continue to monitor the situation.

“The department remains committed to supporting local law enforcement, defending protestors’ constitutional right to free speech and fostering thoughtful dialogue on the matter,” she said. “We recognize the strong feelings that exist in connection with this issue, but it is imperative that all parties express their views peacefully and join us in support of a deliberate and reasonable process for de-escalation and healing.”

“Today, the voices of an indigenous people were heard,” Natural Resources Defense Council president Rhea Suh said. “The rights of a sovereign nation were respected.”

Greenpeace spokeswoman Lilian Molina praised the decision, but noted that the incoming Trump administration “must respect today’s decision and recognize the will of the people to stop this disastrous pipeline. The fight doesn’t end today.”

“History has taught us that it is never a question whether a pipeline will spill, but rather a question of when,” he said. “A comprehensive environmental review will show that this dirty and dangerous project will threaten the safety of every community it cuts through.”