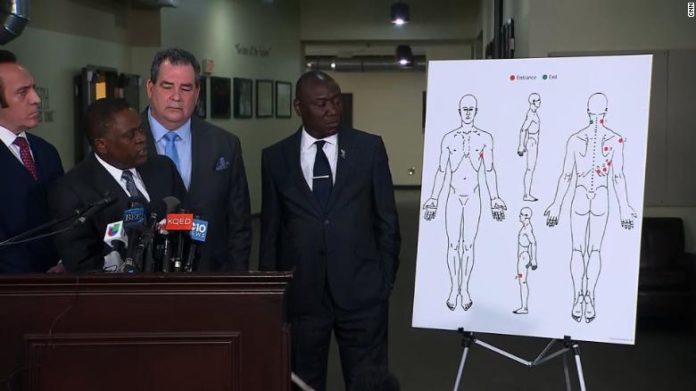 Many will ask if a cover-up is underway in the police killing of Stephon Clark after the official coroner’s report contradicted key findings in the family’s private autopsy.

The Sacramento Police Department released the county coroner’s autopsy report on Tuesday from the March 18 police shooting. Two officers gunned down Clark in a hail of 20 bullets in his grandmother’s backyard. The cops said they believed he had a gun, but it turned out to be a cell phone.

At least six of the eight bullets that struck Clark, a 22-year-old father of two sons, hit him in the back, according to the findings of the family’s private autopsy. It was performed by Dr. Bennet Omalu, the Nigerian-born forensic pathologist who famously exposed the NFL for suppressing a pattern of brain injuries from concussions.

The key difference in the two autopsies center on whether the police shot Clark in the back. Dr. Gregory Reiber, who did a review of the Coroner’s autopsy on behalf of county officials, argued that Omalu was wrong in concluding that the cops shot Clark primarily in the back.

Video evidence of the shooting doesn’t clearly show if Clark stepped toward the officers with an object in his hand when they unleashed a barrage of bullets. It appears in the footage that he’s fleeing from the cops.

Omalu is no stranger to controversy involving alleged cover-ups. In addition to his battle with the NFL, in which he was proven correct, Omalu accused San Joaquin County Sheriff Steve Moore of using his influence to protect his officers involved in the death of suspects.

Omalu resigned in December from his San Joaquin County chief forensic pathologist position. He and a colleague, who also resigned, said they documented evidence of Moore’s attempts to interfere with their findings. Such influence has raised concerns among criminal justice system analysts.

Meanwhile, the investigation into the shooting is ongoing, according to the police department. The results will help to determine whether the prosecutor will file charges against the officers.

Activists are demanding justice for Clark, but many doubt that the case will ever go to trial.