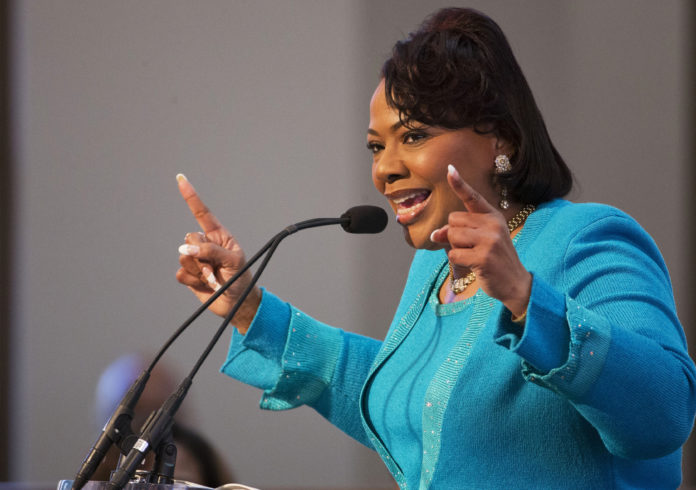 As civil rights leaders and activists gather at sites across the country to celebrate the legacy of Martin Luther King Jr., the slain civil rights leader’s daughter is encouraging Americans to fight for his vision of love and justice “no matter who is in the White House.”

Bernice King addressed more than 2,000 people gathered at her father’s Ebenezer Baptist Church in Atlanta four days before President-elect Donald Trump’s inauguration. She spoke hours before her brother, Martin Luther King III, is scheduled to meet with the president-elect at Trump Tower in New York.

While Bernice King did not offer a detailed critique of Trump, who remains unpopular among black Americans, she said the nation still has a choice between “chaos and community,” the same dichotomy her father wrote and preached about.

“At the end of the day, the Donald Trumps come and go,” Bernice King said. But, she added “we still have to find a way to create” what her father called “the beloved community.”

Trump won fewer than 1 out of 10 votes from black Americans in November, and the president-elect’s continued struggle to connect with the black community was on full display Monday beyond Bernice King’s remarks.

Lewis angered Trump when he told NBC’s “Meet the Press” that he views Trump as an “illegitimate president” because, he said, Russian hackers damaged the prospects of Democratic nominee Hillary Clinton. Trump retorted on Twitter that Lewis is “all talk” and said his Atlanta-based district is “falling apart” and “crime infested.”

“Anybody who suggests that John Lewis is all talk and no action needs a lesson in American history,” Warnock said Monday from his pulpit, drawing a standing ovation. As a young man, Lewis was arrested many times and beaten by authorities as he demonstrated for civil and voting rights for black Americans. Warnock called him “the hero of Bloody Sunday and the conscience of the Congress.”

Warnock then rattled off some of what makes up Lewis’s district, including “the world’s busiest airport,” Coca-Cola’s world headquarters, the King Center for Nonviolent Social Change, Emory University and the Centers for Disease Control and Prevention, and the Georgia Institute of Technology.

Atlanta Mayor Kasim Reed piled on, quoting Trump 10 years ago when he was in Lewis’s district to open a Trump Tower project that would later fail. Trump, recalled the mayor, said Atlanta was doing “a great job” and he was “glad to be here.”

“I don’t know what changed,” Reed said, drawing a second standing ovation at the mention of Lewis.

Republican Sen. Johnny Isakson, who is white, did not mention Trump or Lewis, but called Atlanta “the greatest city” in the “greatest state.”

Lewis was in Miami at King Day events.

Some Republicans have defended Trump’s criticisms of Lewis, arguing it is inappropriate for a congressman to question an incoming president’s legitimacy.

Clara Smith, an Atlanta resident who came Monday to Ebenzer, scoffed at any GOP indignation, remembering that Trump for years questioned whether President Barack Obama was a “natural-born citizen,” as required by the Constitution to serve as president.

“He carried on with that knowing full well what he was doing” to the nation’s first black president, Smith said.

Smith, 66, recalled joining sit-ins and lunch counters of segregated restaurants in her hometown of Louisville, Kentucky. She said she tries to “ignore” Trump and “his foolishness with the Twitter,” but “with everything that’s happening around us” she said “we have to pass along that history.”

Susan Minsk, 48, came to Ebenezer with her 17-year-old daughter Sophie from Sandy Springs, a Republican-leaning suburb just outside of Atlanta and Lewis’s district. As the white mother and daughter waited outside, unsure if they’d be able to get in, Sophie said she worries that Trump’s rhetoric will make social tensions worse.

“He just burns so many bridges,” she said. “Why make everyone feel more segregated than they do already?”