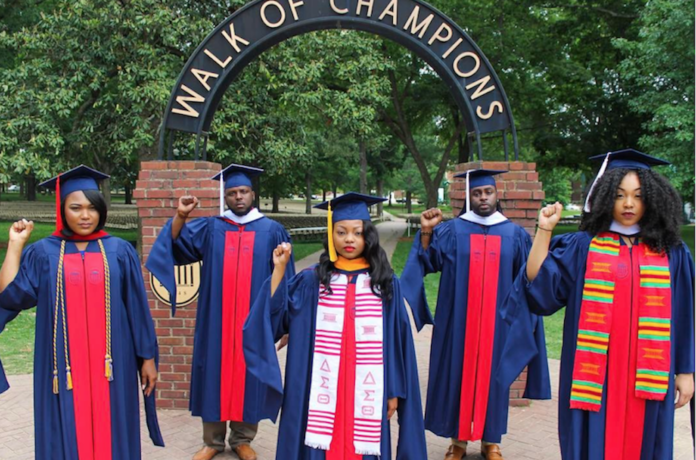 Black graduate school students are celebrating their accomplishments in an awesome way.

In a movement started by Indiana University alumnus Anthony Wright and Columbia University alumnus Brian Allen, both of whom recently completed their master’s programs, grad students are flaunting their black excellence using the hashtag #BlackAndHooded.

“That made me think about how in my time in undergrad, I didn’t have that type of representation or example and how it almost deterred me from applying at all,” he said. “Seeing people like you in any educational or professional space is important in planting the seed of believing you can be there, and by using the hashtag across social media platforms, I sought to create a large pool of that representation across regions, institution types and areas of interest.”

Wright and Allen also created the hashtag to combat the negative stereotypes associated with black people in hoodies, “to redefine what ‘hood’ people could immediately associate with black people” ― though nothing is wrong with hoodies, Wright clarified.

They first sent out the hashtag on their social media accounts in late April, around the peak of graduation season.

Soon after, 2017 graduates bombarded their timelines using the #BlackAndHooded hashtag.

When Black women succeed, we all succeed. Cheers to the NYU Law class of 2017! #ajanibhphotography #BlackGirlMagic #Blackandhooded #allBlackeverything

Only about 13 percent of black people graduated with a master’s degree in 2015, according to a National Center for Education Statistics study. With the unique obstacles people of color face in the world of academia, #BlackAndHooded is meant to celebrate and uplift them.

“I think it’s clear that the higher education system was not constructed with Black folk in mind and their success was definitely not a factor that was considered either,” Allen told HuffPost. “I believe #BlackAndHooded displays the infinite possibilities of black excellence and shows that Black people around this nation are doing amazing things, specializing in all fields and disciplines, and that we are no longer adhering to the confines of lack of access and opportunity that many of our ancestors experienced before us.”

The duo decided to take the idea a step further and create a photo series. In an effort to highlight black grads in one place, they created a website to allow graduates to submit themselves to be featured. They post photos from folks who use the hashtag on social media and those who email them at [email protected]. So far, they’ve featured more than 180 graduates.

Wright said he hopes #BlackAndHooded inspires others to get their degrees, but if education isn’t in their plans, he hopes people at least look at the photos and feel a sense of pride.

“Celebrating black accomplishments is always important in my opinion. Everyone has that inner auntie with the disposable camera in them waiting to cheer on another black person who is out here achieving great things,” he said. “This hashtag just serves as a reminder to some and an eye-opener for others, that black people are more than just the negative images displayed on television and that we are and will continue to make positive contributions to society ― in this case through our scholarship.”