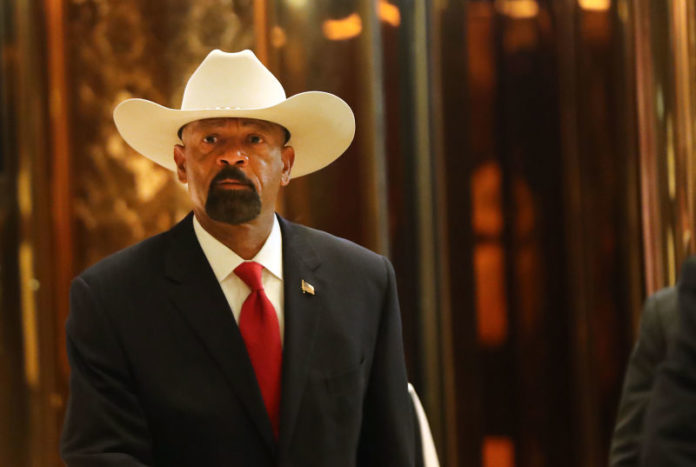 David Clarke Jr.—the black sheriff from Milwaukee who has done everything in his power, including endorsing Donald Trump, to prove that he is different from all the rest of us black people—resigned from his job without explanation on Thursday.

Milwaukee County Clerk George Christenson told the Associated Press that he received a letter of resignation from Clarke, but the letter did not give a reason. Clarke had more than a year left in office as sheriff. According to AP, questions to Clarke’s office were referred to an email address that he provided, and he has not responded to inquiries about the resignation.

On Thursday, Clarke posted a picture of himself posing with a member of law enforcement at the National Fraternal Order of Police convention in Nashville, Tenn.

In Nashville for National Fraternal Order of Police convention. They endorsed @realDonaldTrump for POTUS.👍
With one of Nashville's finest. pic.twitter.com/7EhMupFrcm

Conservatives in Wisconsin had been pushing for Clarke to run for the U.S. Senate and challenge Democrat Tammy Baldwin, but according to AP, he rejected that idea repeatedly.

Clarke, who had been sheriff of Milwaukee County since 2002, recently published a memoir, Cop Under Fire. In May he announced that he had accepted a job at the Department of Homeland Security, but that plan never came to fruition. He later claimed to have withdrawn his name from consideration.

As one of the few blacks to speak at the Republican National Convention, Clarke has been openly critical of the Black Lives Matter movement, which he has described as having a “hateful ideology.”

He came under fire this year during an inquest into the dehydration death of an inmate in his jail, which raised questions about how he managed it. In June a former female inmate was awarded $6.7 million in damages for being repeatedly raped while she was in custody in Clarke’s jail four years ago.

n May, CNN reported that Clarke had plagiarized portions of his master’s thesis, and in a hilarious bit of irony, in January he made headlines after he called CNN’s Marc Lamont Hill a “jigaboo.”

According to AP, Clarke earned more than $105,000 in speaking fees last year at more than three dozen events.

In the meantime, Wisconsin Gov. Scott Walker, a Republican, will be responsible for appointing someone to serve out the rest of Clarke’s term, which was due to end in 2018. That decision will be made once Walker’s office receives official notice of Clarke’s resignation.