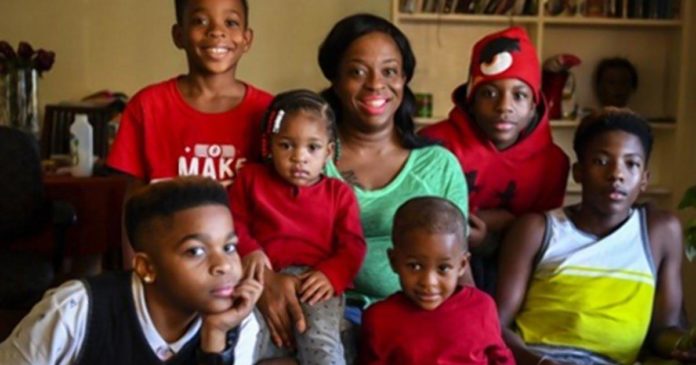 Hundreds of people took on the role of Santa this year for a family whose six children would have gone without gifts.

The Britten family had a year of struggles and couldn’t afford to give their kids the Christmas everyone so hoped for. The mother, Tyshika, turned to Craigslist, asking readers to please help give her family the Christmas they deserved.

“I am a mother of six, 5 boys and 1 baby girl,” she wrote, explaining that her family was facing eviction from their home in Maryland. “I’m so hurt. I’m trying my best. I pray every day and now I’m begging for help. I know it’s not about the gifts, but they are kids! I’m such a failure right now… please help me.”

Her plea struck a cord with readers and gifts began arriving at their doorstep. And not just any gifts, but things like a Kindle Fire, a PlayStation 4 as well as stuffed animals and dolls for her little girl. Someone even went so far as to drop off a puppy that the family named Phoenix.

“I was just so moved by the story and what this mother did for her children,” the singer said. “I thought those kids must be so proud of their mother for reaching out. That takes a lot of courage.”

Not everyone, however, had kind things to say. There were some online critics who called out the mother for exposing and humiliating her family.

“I’m not exposing my family,” she told to the Washington Post. “I’m exposing how a lot of people have to live. There are people all over this country who have the same problems we have. This is real life.”

A GoFundMe page has also been set up and it has raised almost $18,000 with Tyshika calling it “a head start.”

“I am a proud mother of six,” she stated. “I love my children and I will take care of them, and I will get them what they need, any way I can. This year, they got everything they wanted.”