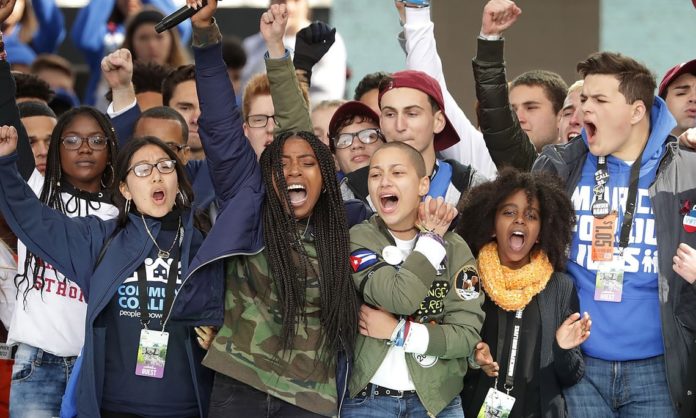 Thousands of students will stand in solidarity during another collective day of action against gun violence on April 20.

The National School Walkout plans to build on the work started on National Walkout Day on March 14 and March For Our Lives on March 24. High school students, including teens of color, will spend nearly the whole school day in formation. They will shout for reform and march for lives on Friday, a day that also marks the 19th anniversary of the Columbine High School shooting.

At 10 a.m. across time zones, students will walk out of their schools and stand in 13 seconds of silence in memory of those killed at Columbine. They will then engage in open mics, rallies, protests, voter registration drives, letter writing campaigns and other forms of activism for the rest of the day.

Marchers will remember Columbine, the Sandy Hook and Parkland tragedies, as well as every other school and city where gun violence has taken lives.Several Parkland students will participate in the National School Walkout. Aside from urging solutions for gun violence, marchers plan to hold elected officials accountable and engage students to take political action.

Marches like the National School Walkout also point attention to the brutality and fatal shootings that claim the lives of people of color, including Black women. A number of young activists have shared stories of the Black girls and women who are often overlooked or forgotten specifically when it comes to violence.

‘Hundreds of Black girls are killed every year and nobody knows, nobody pays attention.’ — Everyone needs to hear 11-year-old Naomi Wadler’s powerful message about Black women in the U.S.

Concerns over the criminalization of students of color for calling attention to stories about Black lives or participating in protests have also been raised.

The ACLU wants to make sure that students know their rights. Organizers of the walkout also advise the students go to an outside common space on their school campus and stand together during the event.

Students are encouraged to stay in safe situations, but most of all, they are urged to stand up against gun violence.