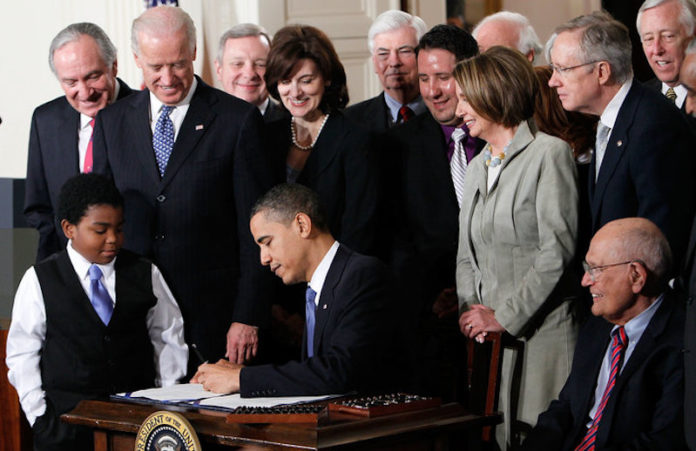 The Affordable Care Act overcame the Tea Party protests of 2009 and the Democrats losing their filibuster-proof Senate majority in 2010. It survived two challenges in front of the Supreme Court and the calamitous rollout of healthcare.gov.

Now it has withstood the attempt to replace it with the American Health Care Act, also known as Trumpcare.

Somehow, despite the intense political forces arrayed against it, and the mind-boggling policy problems it tries to solve, the 2010 health care law keeps defying efforts to wipe it out. That says something about the people who wrote it ― and what they have achieved.

Obamacare has never been hugely popular, and it has never worked as well as its architects hoped. Millions of Americans don’t like it and, even now, there are parts of the country where the markets are struggling to survive.

But the program has provided security and access to care for millions of others. More importantly, it has shifted the expectations of what government should do ― and of what a decent society looks like.

The defeat of the Republican repeal effort shows just how hard it is to undo those changes. And it won’t get any easier.

Trump and the Republicans in Congress had spent all of 63 days trying to pass their Obamacare repeal ― less than three weeks of which were spent actually debating the text of the AHCA.

At the time, every apparent error loomed large ― from taking on health care at all, to letting the process drag out for more than a year to cutting unpleasant deals with health care’s special interests.

Like the Republicans this year, Democrats found consensus difficult to achieve ― among the outside groups, and within their own ranks as well. Liberals wanted a more generous program, and a public option. Moderates wanted to avoid too much government spending and too much meddling with the way independent businesses operate.

But unlike the Republicans, the Democrats’ reaction was to work with the different groups and slowly bring them along ― most vividly, by negotiating with a handful of moderate Republicans, in the hopes that one or two (or maybe more) would sign onto the plan. It never happened, but the effort to woo those members helped secure moderate Democrats who needed to tell their constituents that, yes, they had tried to be bipartisan.

One reason Democratic leaders were able to preserve legislative momentum was that they understood, at all times, where they were trying to go ― and they were fluent enough in the policy to handle direct negotiations on their own. One of the enduring images of Obama during the Affordable Care Act fight was his visit to a Republican Party policy retreat in Baltimore, where he fielded questions and parried criticisms from the assembled members for roughly 90 minutes.

Trump, by contrast, seemed to lack anything beyond a superficial understanding of the bill, to the point where allies worried about letting him negotiate details. “Either doesn’t know, doesn’t care or both,” a Capitol Hill aide said about the president.