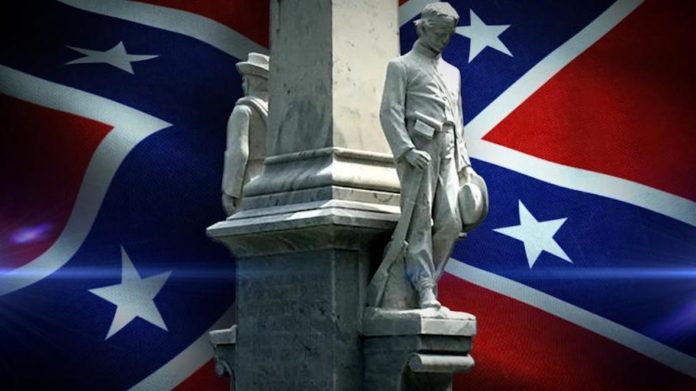 Tennessee State Rep Andy Holt (R-Dresden) got real petty during a House floor session, comparing the folks who torn down the statue to ISIS terrorists. Then the GOP-majority House voted to punish the residents of the majority-Black city of Memphis by taking away $250,000 for the city’s upcoming bicentennial celebration.

Here’s another startling detail: Republicans slid the amendment to take away the money as a last-minute attachment to a House appropriations bill, The Associated Press reported.

One Memphis rep wasn’t having the vote.

“You can boo all you want but let’s call it for what it is,” Democratic Rep. Antonio Parkinson, who is Black, said, adding that the amendment was “vile and racist.” “You remove money from a city because we removed your God from our grounds.”

Memphis became a focus of the movement to remove Confederate statues last year. A legal loophole enabled the city to sale its parks, housing the three monuments, to a nonprofit, which took them all down. A statue of Confederate President Jefferson Davis and Nathan Bedford Forrest — a Confederacy general, slave owner and KKK member — were removed overnight. A bust of a Confederate soldier was also taken down.

The Memphis removal ignited a heated debate nationwide. And now, it seems Republicans can’t accept what activists have said for a long time now: the statues stand as symbols of hate.

Another Republican is also fighting the monuments’ removal in Alabama, adding insult to the injury in Memphis. Alabama Governor Kay Ivey released a campaign ad that touted a measure that she signed in favor of Confederate monuments last year, AL.com reported.

New York is also on the statue removal radar: the controversial statue of doctor J. Marion Sims was removed from Central Park Tuesday. Sims, called the “the father of gynecology,” performed surgical experiments on female slaves without anesthesia in the 1800s. The statue had been at the park for 84 years, CBS New York reported.

Sims’ statue may be replaced with one honoring a woman of color — an emerging pattern that is being celebrated by many folks. Whether Republicans’ are with it or not, racist monuments are clearly coming down and Black excellence statues are going all the way up.