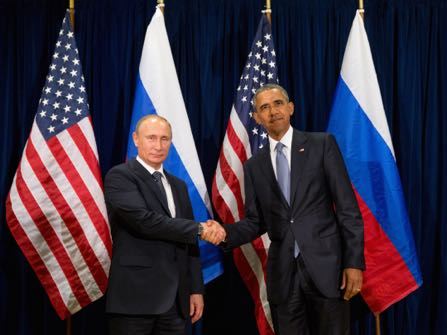 Russian President Vladimir Putin was so contemptuous of Barack Obama that Putin’s aides, if not Putin himself, would refer to the United States’ first Black president using the N-word, according to a just-released book by two investigative reporters.

Michael Isikoff, now chief investigative correspondent for Yahoo News, and David Corn, Washington bureau chief for Mother Jones, also cite information indicating that Donald Trump, who had claimed that Obama was not born in the United States, vied with Putin in his hatred of the 44th president. They report on a controversial dossier that said Trump hired prostitutes to defile space where the American president and first lady had slept.

“Putin and his inner circle had nothing but utter contempt for Obama and his administration — much of it cast in racist terms,” Isikoff and Corn write in Russian Roulette: : The Inside Story of Putin’s War on America and the Election of Donald Trump.

“Putin and his top advisers routinely denigrated Obama and his national security team as ‘weak’ and ‘indecisive’ — and then, contradictorily, blamed him for meddling in Russia’s internal affairs. In Putin’s presence, Obama would be called a ‘monkey,’ and it was not uncommon for the American president to be referred to as the N-word.”

The book has been No. 1 on the Amazon best-sellers list for the past two days, Brian Stelter reported Wednesday for his “Reliable Sources” newsletter.

Corn and Isikoff continued, “The small number of U.S. officials privy to the reports from this source wondered if Putin and his crew truly viewed Obama in such crude terms. But the source’s credibility was bolstered by a recent episode.

The U.S. Embassy lodged a protest, and Rodnina claimed on Twitter that her account had been hacked. When the Sochi Olympics opened, Putin selected Rodnina, a member of his United Russia Party in the Duma, as one of two Russian athletes to light the Olympic torch. This seemed like a not-too-veiled message. . . . ”

“Russian Roulette,” released Tuesday and accompanied by a blizzard of media appearances by its authors, repeats information from a dossier put together by the former British intelligence agent Christopher Steele. Steele had headed Britain’s intelligence Russia desk, then started his own private investigative agency.

Quoting the dossier, the authors write, “Source D, described as ‘a close associate of TRUMP who had organized and managed his recent trips to Moscow,’ claimed that ‘TRUMP’s (perverted) conduct in Moscow included hiring the presidential suite of the Ritz Carlton Hotel, where he knew President and Mrs. OBAMA (whom he hated) had stayed on one of their official trips to Russia, and defiling the bed where they had slept by employing a number of prostitutes to perform a ‘golden showers’ (urination) show in front of him. . . .”

Get the rest of this article at Richard Prince’s Journal-isms.