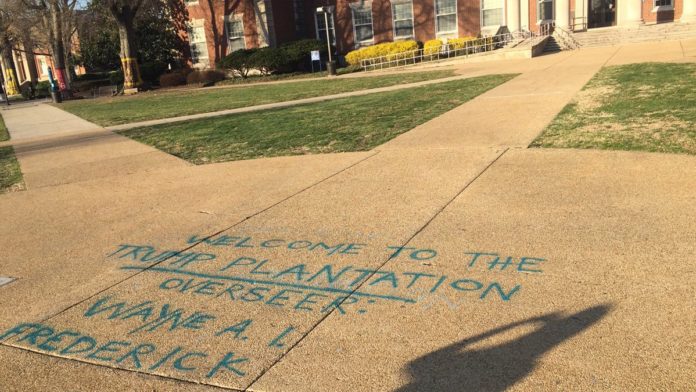 This probably won’t end well. Twitter user @Italia_calino shared the image above on Tuesday morning, depicting sidewalks in Howard University’s Yard with the spray-painted message “Welcome to the Trump Plantation. Overseer: Wayne A. I. Frederick.”

So this is on Howard University's Yard this morning. pic.twitter.com/e8WGA4EPHq

That message was not the only one marked on school premises, with others claiming that Frederick, the university’s president, doesn’t “care about black people” and is “coonin’ for Howard.”

On Monday, social media lit up after Education Secretary Betsy DeVos issued a statement calling HBCUs the “real pioneers when it comes to school choice.” Many weren’t appreciative of the tone-deaf nod, which some said ignored the fact that historically black colleges and universities were created because black Americans were routinely denied access to higher education or quality education under the segregated Jim Crow system.

President Donald Trump—who met with several HBCU presidents on Monday—has said that he has a special plan to help HBCUs and is expected to sign an executive order later Tuesday.

Thank you to the great presidents of our #HBCUs for their commitment to higher education. Read more here: https://t.co/m2Adyvvu6a pic.twitter.com/zjXWSX9cdE

But real controversy unfolded at the university earlier this month when Frederick and a few student leaders had a private meeting with new Secretary of Education Besty DeVos, which was actually DeVos’ first official campus visit as secretary of education.

The Hilltop, Howard’s student newspaper, noted students’ reactions to the meeting—which many didn’t know was happening at the time until it was over—and some of them were trying to understand DeVos’ motives. However, one fact remains abundantly clear: Many students don’t want Trump or his administration near their beloved school and using it for some ulterior motive.

It is unclear who is responsible for the messages marked across campus. The group known as Concerned Students 1867 distanced themselves from the incident and denounced the destruction of school property.