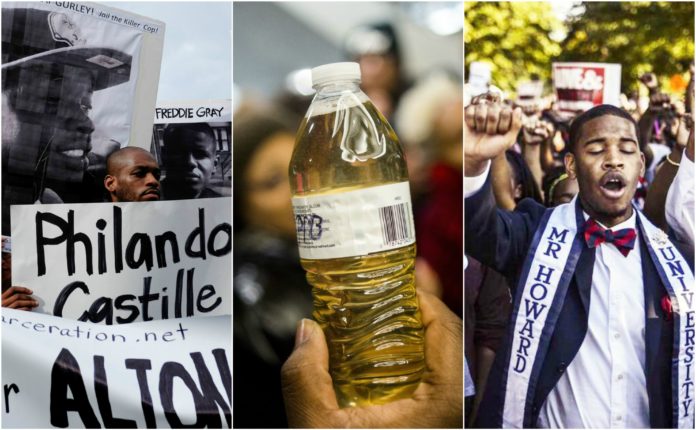 On the national front, 2016 was definitely a big year for news. From a highly controversial (and often contentious) presidential election to more police shootings of Black men, the year was filled with breaking news. The Defender takes a look at the top 10 national stories.

Billionaire businessman Donald Trump shattered expectations with an election night victory that revealed deep anti-establishment anger among American voters and set the world on a journey into the political unknown. The Republican nominee achieved one of the most improbable political victories in modern U.S. history, despite a series of controversies that would easily have destroyed other candidacies, extreme policies that drew criticism from both sides of the aisle, a record of racist and sexist behavior, and a lack of conventional political experience. Though Democratic candidate Hillary Clinton beat Trump by 2.8 million popular votes, he won where it mattered, with the Electoral College, 306 to 230.

Police shootings of unarmed Black men once again drew national outrage. Anger over the killings of Alton Sterling in Baton Rouge, Philando Castile in Milwaukee, Terence Crutcher in Tulsa, and Keith Lamont Scott in Charlotte led to protests around the country. On the flip side, at least 64 law enforcement officers were shot and killed this year, well ahead of last year’s 12-month total of 42 fatalities. Some of the officers were ambushed at random while others were shot while responding to calls. The most shocking incident occurred in Dallas, where five officers were ambushed and killed by a Black man, Micah Xavier Johnson, following the deaths of Sterling and Castile.

The Smithsonian National Museum of African American History and Culture opened on Sept. 24 in Washington, D.C. after a long journey. Thirteen years after Congress and President George W. Bush authorized its construction, the 400,000-square-foot building stands on a five-acre site on the National Mall, close to the Washington Monument. The museum’s creators did not want to build a space for a Black audience alone, but for all Americans. Interest in the museum was so strong that tickets (though free) were sold out through April, 2017.

With the rise of racial tension in America coupled with the Black Lives Matter movement, historically Black colleges and universities (HBCUs) saw a surge in enrollment. Freshmen enrollment was up by 22 percent at Dillard University, 49 percent at Shaw University and 32 percent at Tuskegee University. Nearly 38 percent of HBCUs reported a 10 percent increase in enrollment between 2013 and 2014. The surge comes after protests at predominantly white institutions (PWIs) around the country demanded more Black students, faculty, and staff; name changes for buildings named after racists; mandatory diversity training; and the creation of safe spaces for students.

In keeping with his belief that the United States is a nation of second chances, President Barack Obama issued 170 commutations to federal inmates during an eight-day period in November. Since taking office, Obama has commuted the sentences of 1,023 men and women incarcerated under “outdated and unduly harsh sentencing laws,” including 342 individuals who were serving life sentences. Obama has also granted commutations to more prisoners than the past 11 presidents combined. The majority were offenders sentenced for nonviolent drug crimes.

The FBI reported that attacks against American Muslims surged, driving an overall increase in hate crime against all groups. Blacks were the most frequent victims of hate crimes based on race, while Jews were the most frequent victims based on religion. The data, which is the most comprehensive look at hate crime nationwide, noted an alarming rise in some types of crimes tied to the viciousness of this year’s presidential campaign and the aftermath of terrorist attacks at home and abroad. That trend continued to spike, with civil rights groups and news organizations reporting dozens of verbal or physical assaults on minorities and others that appear to have been fueled by divisions over the election.

Prolonged rainfall in southern parts of Louisiana resulted in catastrophic flooding that submerged thousands of houses and businesses. Louisiana’s governor called the disaster a “historic, unprecedented flooding event” and declared a state of emergency. Many rivers and waterways reached record levels, and rainfall exceeded 20 inches in multiple parishes. Because of the large number of homeowners without flood insurance that were affected, the federal government provided disaster aid. The flood has been called the worst U.S. natural disaster since Hurricane Sandy in 2012. Thirteen deaths were reported as a result of the flooding.

Six current and former state employees were charged in an ongoing criminal investigation into the Flint, Mich. water crisis. According to prosecutors, the allegations showed “a concerted effort to cover up warning signs of lead poisoning” in Flint, where Blacks make up 56 percent of the population. In 2014, the city changed its water source from treated Detroit water to the Flint River. Thousands of residents have been since exposed to drinking water with high levels of lead that could cause a range of serious health problems.

The board of directors of the NAACP ratified a resolution passed at its national convention calling for a moratorium on charter expansion and strengthening charter oversight. The NAACP vote came after intense lobbying against the resolution from the industry and its allies. The organization faced a backlash as a result of the resolution. The Black Alliance for Education Options, a coalition of 160 education and community leaders, urged the NAACP to reconsider its stance.

The U.S. Treasury Department announced that it would replace Andrew Jackson with Harriet Tubman on the $20 bill. The proposal to replace the slaveholding  Jackson with Tubman, the former slave and abolitionist, was called the most sweeping and historically symbolic makeover of American currency in a century. Tubman (1822-1913) and civil rights heroine Rosa Parks (1913-2005) were among the top finalists in a grass roots campaign to put a woman on the $20 bill. It could be a decade or more before the bill is actually in circulation.