Rep. John Conyers (D-Mich.) is the latest politician to be hit with a wave of sexual harassment allegations, but on Sunday, a group of former female staffers for Conyers defended him, saying that they had not seen the kind of behavior Conyers is accused of exhibiting.

“While we do not pass judgment on the specific allegations reported in the press or the women who brought them, our experiences with Mr. Conyers were quite different than the image of him being portrayed in the media,” the former staffers wrote in a statement to the Huffington Post.

“Mr. Conyers was a gentleman and never behaved in a sexually inappropriate manner in our presence,” they continued. “He was respectful, valued our opinions, challenged our thinking, and treated us as professionals.”

The House Ethics Committee is now looking into the allegations, and while Conyers has continued to deny the accusations made against him, he did announce that he would be stepping down as the ranking member of the House Judiciary Committee while the investigation was ongoing.

“I deny these allegations, many of which were raised by documents reportedly paid for by a partisan alt-right blogger,” Conyers wrote in his statement. “I very much look forward to vindicating myself and my family before the House Committee on Ethics.” 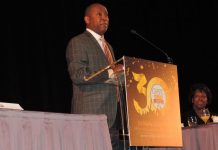