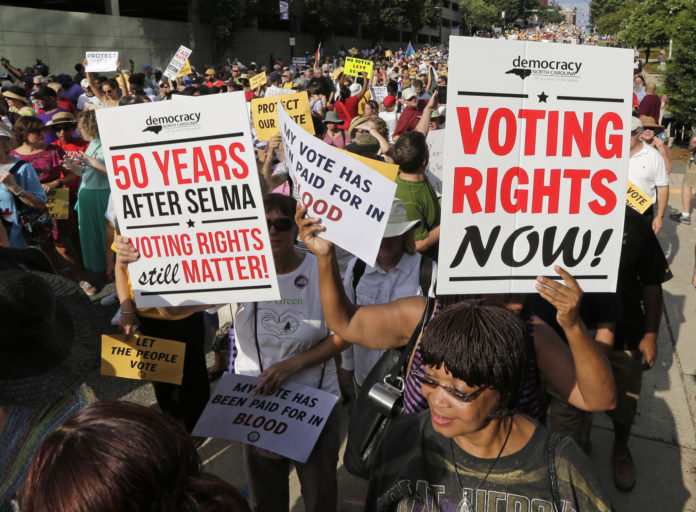 Green Party presidential candidate Jill Stein’s effort to recount the vote in states Donald Trump closely won continued this weekend after a brief stutter-step when Stein said she ended, but then resumed, her efforts to push a recount in Pennsylvania. Stein’s actions have been called many things—the current president-elect calls them “a scam”—but are they also obfuscation of the real issue?

“We certainly didn’t make it easier for anyone to vote. We need to open up the political process and let everybody come in,” Rep. John Lewis (D-Ga.) said, in response to the question of whether the election was stolen by suppression.

Rep. Terri Sewell (D-Ala.), who represents Selma, Ala., also said, “If one person was turned away because of voter ID, it threatens the whole integrity of the process.”

According to many experts who watch elections, the real controversy of 2016 is not the recount, but the hundreds of thousands of votes that never were cast in the first place due to widespread voter suppression.

Highlighting this issue, the Lawyers Committee for Civil Rights Under Law, Common Cause and State Voices held a two-day conference the first two days of December titled, “2016 Election Protection Post-Election Convening.” The Lawyers Committee also released a report titled, “Striving to #ProtectOurVote in 2016: A Snapshot of Election Protection 2016.”

The 2016 election was the first in 50 years without the full protections of the Voting Rights Act of 1965. The election turned out exactly the way one would imagine it would: with numerous examples of local officials either misrepresenting the law or making it

more difficult to cast a ballot. Officials across Texas in Denton, Tarrant, Grimes, Harris, Medina and Montgomery counties continued to seek photo ID from voters despite an en banc ruling from the 5th Circuit that found that the state’s photo-ID law had a discriminatory effect on the state’s Black and Latino voters.

“I think what happened in this election [was] voter suppression and manipulation of the voter rolls. I think we saw, basically, a stolen election,” said Ben Ptashnik, executive director of the National Election Defense Coalition.

Many continue to say there’s “nothing to see here” when it comes to efforts at voter suppression. But there has been plenty to witness after the voting decision followed the election of the nation’s first African-American president.