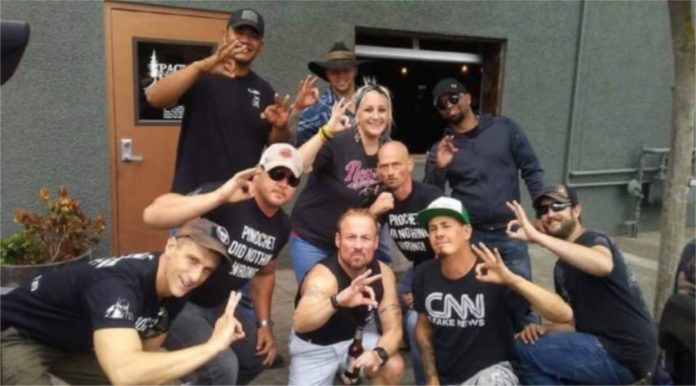 The notion of Black and Latino men participating in white supremacist hate groups conjures images of Spike Lee’s film “BlacKkKlansman,” a comedic dramatization of the real-life story of Ron Stallworth, a Black detective who goes undercover and infiltrates the Klan. Even more outlandish is comedian Dave Chappelle’s depiction of Clayton Bigsby, a fictional blind Black man who is a Klansman. However, the concept of a Black white supremacist is not so far-fetched as many would think, as pro-Trump, white supremacist gangs with Republican Party affiliations are engaging in street violence against anti-fascist protesters — with the participation of Latino and Black members.

Two of the fascist groups in question are Proud Boys and Patriot Prayer. Proud Boys was founded in 2016 during the presidential election campaign by VICE Media co-founder Gavin McInnes. According to the Southern Poverty Law Center, the group rejects the notion they are members of the racist alt-right movement, insisting instead they are a fraternal organization following an “anti-white guilt” and “anti-political correctness” agenda. Further, while Proud Boys seek mainstream appeal, McInnes, who has appeared often on Fox News, has ties to the white supremacist movement and the racist right, enjoys making Nazi salutes, and uses the word n****r. Additionally, the Islamophobic and misogynistic group helped organize and participated in the 2017 “Unite the Right” rally in Charlottesville, Virginia. This despite the fact the Proud Boys formally opposed the Charlottesville event.

Nonwhite members are allowed to join Proud Boys — whose initiation ritual involves beatings — provided they “recognize that white men are not the problem.” While the group boasts multi-ethnic membership, “their ‘Western chauvinist’ rhetoric and hard-right stances have made them the new crossover point from reactionary conservatism to full-blown, street-fighting fascism,” according to Truthout.

“I love being white and I think it’s something to be very proud of,” McInnes once told The New York Times, adding, “I don’t want our culture diluted. We need to close the borders now and let everyone assimilate to a Western, white, English-speaking way of life,” McInnes once said. Proud Boys attracted attention recently when they joined forces with neo-Nazi skinheads and assaulted protesters following McInnes’ appearance at the establishment-elite Metropolitan Republican Club in Manhattan in New York. Although 30 of the gang members violently beat several protesters, the NYPD made no arrests of the neo-fascists.

Enrique Tarrio, president of the Miami chapter of the Proud Boys, is a self-identified Afro-Cuban who participated in the Charlottesville protests, and was one of dozens of Black, Latino and Asian participants in an August 4 right-wing extremist rally in Portland, as part of a phenomenon known as  “multiracial white supremacy.”

Meanwhile, Patriot Prayer is a radical right group that has attracted crowds along the West Coast, and whose members include Trump supporters and white nationalists. The group built a reputation for joining forces with the alt-right and picking fights with anti-fascist protesters in cities such as Portland. Patriot Prayer’s front-man had been Tusitala “Tiny” Toese, a Samoan brawler who later joined the Proud Boys and calls himself “a brown brother for Donald Trump.” The group has drawn concerns because of their violent and controversial protest tactics, including bringing a cache of guns to a recent protest, and planned protests on college campuses to protest age restrictions on semiautomatic rifles. Patriot Prayer leader Joey Gibson — who is half-Japanese and has attracted neo-Nazis and neo-Confederates to his rallies — lost his Republican primary bid for the U.S. Senate in Washington state.

Some white supremacist groups have found common cause with Latinos, as Mic reported, with the result being that Latino white supremacy may not necessarily be a contradiction in terms. A number of participants in the Charlottesville rally were Latino and Afro-Latino and participated in the racial violence and were arrested. This reflects the reality that an increasing number of Latinos, including Afro-Latinos, consider themselves white and believe others perceive them as white in a nation they view as a European nation, one in which those who are not white are rendered a “nonentity.”

George Zimmerman, who killed Trayvon Martin, is of Afro-Peruvian descent, yet became a cause célèbre for white supremacists. Zimmerman made and sold Confederate flag art to raise legal fees for his murder case, with a “Muslim-free” gun store in Florida selling his rebel flag prints. Meanwhile, at the recent confirmation hearings of Brett Kavanaugh to the U.S. Supreme Court, his former clerk Zina Bash — who is Mexican and Jewish — was accused of making white supremacist hand gestures twice as she sat within camera view behind the judge during his televised testimony.

Some people of color may be drawn to white supremacy and the fringe right due to their identification with nationalism, patriotism, conservatism and the military. According to David Neiwert, author of “Alt-America: The Rise of the Radical Right in the Age of Trump,” “The ranks of people of color who show up to these right-wing events are totally dominated by males.” The alt-right targets white men with a message of male resentment, and some Black, Asian and Latino men, some of whom were raised in conservative environments, are attracted to the message. Video-game culture and conspiracy theory websites are common entry points for white nationalism.

The role of historically oppressed groups in perpetuating white supremacy is nothing new. However, the rise of Black and Latino white supremacist gang members and neo-Nazi street brawlers is brand new and deserves our attention.