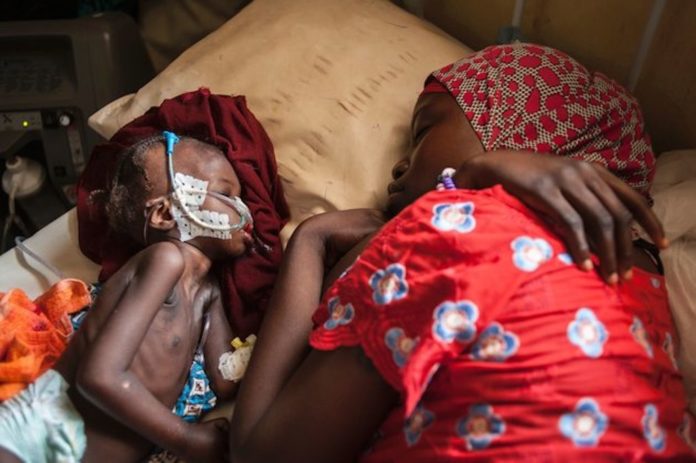 Yagna Ibrahim is a woman who has a presence that is difficult to ignore. She strides into the room with grace and confidence, pulls out a chair and sits down next to her friend and fellow women’s rights activist Rabia Musa.

The two women are part of an informal network of women’s rights activists that is trying to mobilize women in Nigeria’s northeastern Borno State to help displaced women and children, providing food, clothes, money and other support.

Both are in their fifties, wives and mothers, educated and financially independent. They prefer not to tell their husbands the details of their work in case they think it’s too dangerous.

“Our society has changed forever and we have to work to limit the damage,” Ibrahim explains during an interview in Maiduguri, the capital of Borno state.

Over the past seven years, the militant group Boko Haram has set about destroying communities, schools and health facilities in northeast Nigeria and has used sexual violence and the kidnapping of women and girls to terrorize the population. At least 20,000 people have been killed, and an estimated 2.5 million people have been displaced.

Amid the carnage, communities have been unable to tend to their land and multiple harvests have failed. Hunger has taken over. Children and adults have wasted to death. The United Nations’ children’s agency UNICEFwarned that 75,000 children could die this year without a major aid effort in northeast Nigeria.

Yet aid has been slow to reach people in the region. Some Nigerians fear corrupt local officials are diverting resources from people in need. The international aid system was slow to recognize the scale of the crisis and has not yet cranked into full gear. Ongoing fighting has complicated the effort – the U.N. estimates that 2 million people remain inaccessible to aid agencies.

The magnitude of the crisis is slowly coming to light as the Nigerian military “liberates” areas previously under Boko Haram control. Each village and town is a piece of a jigsaw that, when pieced together, reveals a level of suffering that has been largely hidden from the rest of the world.

Meanwhile, traumatized families continue to pour out of their destroyed homes and villages, seeking sanctuary, food and medical care in Maiduguri. Their number has risen sharply in the last six months. Maiduguri’s population has almost doubled in size to more than 2 million people in recent years.

There are 11 official and unofficial camps for people who have been displaced across Maiduguri. People living in the unofficial camps have little access to aid. In one of these camps, known as Custom House, residents told aid workers last month that they had no way to buy food and were boiling leaves to survive.

People displaced from areas taken by Boko Haram have been met with suspicion in Maiduguri. Local authorities have openly fanned fears that the displaced population may have radicalized Boko Haram sympathizers in their midst.

Women have been particularly designated as suspect. Local officials describe women freed from Boko Haram control as a security risk, some claiming that is impossible to ensure that the camps for the displaced have not been “infiltrated” by “the wives of Boko Haram.”

When people in Borno refer to “wives,” it is a euphemism for rape and sexual slavery. While it is possible that some women have voluntarily joined or married fighters, most survivors describe forced marriage and horrific sexual violence, including rapes by multiple men.

“Unspeakable things start happening to girls from the age of 12,” Amina, a 15-year-old girl from Bama who recently gave birth to her first child, said in a maternity clinic on the outskirts of Maiduguri.

Another girl, 16 years old and pregnant, said Boko Haram rounded up most of the girls around her age from her village and took them away. While she evaded kidnapping, her brothers said they could not protect her from Boko Haram and forced her to get married.

Women who became pregnant while in Boko Haram captivity have been particularly shunned by local communities. The militant group’s repeated use of women and girls as suicide bombers has also roused the fears of the local population.

This week, a car bomb exploded less than 0.6 miles (1km) away from Muna Garage camp, killing five people. Camp residents told an aid worker – who asked to remain anonymous because not authorized to speak to the media – that a female suicide bomber was behind the attack and that her two-year-old child survived the blast.

The deepening suspicion and fear will make life even more difficult for women who are already struggling to survive on the margins of a fractured society while overcoming the horrors of the past.

In Muna Garage Camp, Aisha, a mother of five, described fleeing her home in Mafa when Boko Haram militants attacked two years ago.

“They came like wildfire to burn and loot our homes – they showed us no mercy, no mercy at all,” she says. “I picked up my children and ran and have been running since then.”

All the women in this story requested their names be changed for their own protection.