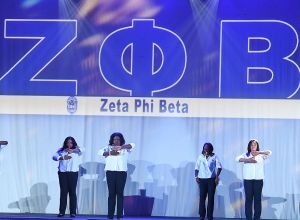 According to The Washington Blade, the new directive, adopted by Zeta Phi Beta’s International Executive Board on January 12 states:

“To be eligible to receive an invitation for membership and to hold membership, an individual must be a cisgender woman and must be committed to living a lifestyle of active service and sisterhood and she must typify the values, standards, morals, customs and attributes of finer women in her community and beyond.”

The Washington Blade said someone sent a copy of the statement to them. Since then, Zeta Phi Beta has yet to respond to multiple requests for comment.

I wish I could say I’m surprised by this measure.

For as much as Black fraternities and sororities have sought to uplift the Black community, there are still parameters around the type of Black folk who are worthy of uplift. And more often than not, those people are not a part of the LGBTQ community. And Black women seem to be at the bottom of the totem pole. And while trans women are more likely to die at the hands of men, apparently, there are other Black women who seem to be invested in the oppression of even further marginalized Black women.

Sadly, this directive will not age well as it’s pretty unecessary and exclusionary now. For the life of me, I can’t understand what Zeta Phi Beta stands to benefit by banning trans women from their sorority. How does a woman’s gender identity prevent or prohibit her from being a good sister to fellow sorority members and serving the community?

At a time when HBCUs like Spelman have opened their enrollment to trans students, I’m confused about the cisgender requirement.