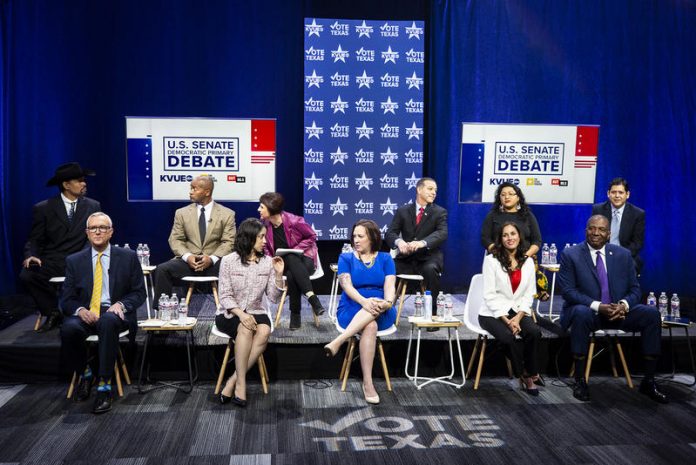 With just one week to go before Super Tuesday, more than half of voters still don’t know enough to form an opinion on any of the Democratic candidates hoping to take on U.S. Sen. John Cornyn in November, according to a new poll.

Among likely Democratic voters with a preference, U.S. Air Force veteran MJ Hegar leads the pack, with 41%. Hegar far outpaces the second candidate, state Sen. Royce West, whose support is at 12.3% of prospective voters, according to the poll released Tuesday by the University of Houston’s Hobby School of Public Affairs.

But more than half of respondents said they have no opinion on Hegar, while 63% of voters said they have no opinion on West or Former Houston City Council member and congressman Chris Bell, both of whom have spent decades in politics. And more than 46% of voters either don’t know who they are going to vote for or do not plan to vote for any of 12 candidates in the Democratic primary for U.S. Senate in Texas, according to the poll.

The candidates have had to reckon with a race far overshadowed by a competitive Democratic presidential primary, and the sheer number of candidates in the race hasn’t made it easy for anyone to gain traction, according to Renée Cross, senior director of the Hobby School.

“Texas Democrats were optimistic about their chances against Republican Sen. John Cornyn, especially after Beto O’Rourke came close against Ted Cruz in 2018,” she said. “But with so many candidates, it’s been hard for anyone to stand out.”

The Senate poll was conducted between Feb. 6 and Feb. 18.

Because of split support, the poll predicted that the race would likely end in a runoff, with West, Bell and Tzintzún Ramirez all having a realistic shot of finishing second, according to the poll.

The poll is just the latest data point suggesting disinterest in the race. Last week a University of Texas/Texas Tribune poll found that while Hegar was the clear favorite among candidates, a full 40% of respondents in that poll said they either would not vote or refused to say whether they would vote for more than half the candidates.

In the initial question about how they would vote, 56% of Democrats didn’t express a preference in that poll.