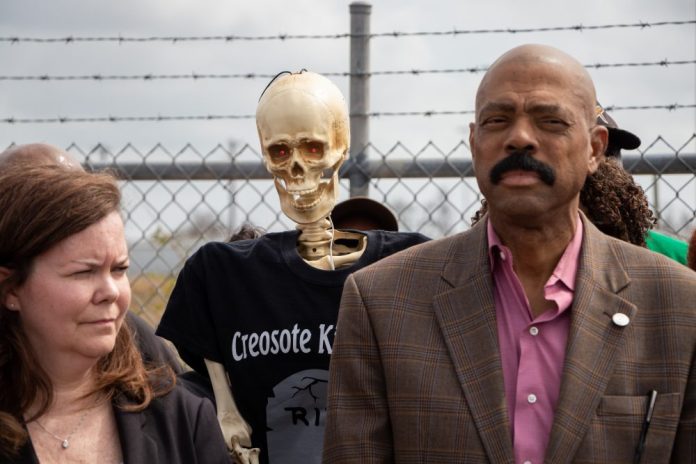 The company that owns a contaminated Kashmere Gardens railyard will submit a cleanup plan to the city this summer, after higher rates of cancer were found in the community last year, officials announced Monday.

The Texas Commission on Environmental Quality is asking for the cleanup plan along with a revised permit application from Union Pacific, which owns the yard formerly known as the Houston Woods Preserving Works site, by Aug. 31.

“There is still more work to be done in this area to clean up what I consider environmental racism,” said Texas Sen. Borris L. Miles. “The state of Texas is not going to allow Union Pacific to ignore this site that has been plaguing our community for three decades.”

Miles was joined by Mayor Sylvester Turner, alongside officials from the TCEQ, the Texas Department of State Health Services and community members to provide the update on the site, after Fifth Ward and Kashmere Gardens’ high rates of cancer cases were reported last year by DSHS.

Epidemiologists found more cases of adult cancers on lung, esophagus and throat than expected at the site, and the confirmed rate of cases was also higher than the state’s, according to an investigation last year.

Creosote, a wood preservative frequently used in railroad ties and utility poles, was found at the site, and has been identified by the Agency for Toxic Substances & Disease Registry as a probable human carcinogen.

Creosote has been present in the area since 1900, a senior TCEQ official noted in an emailed request for the study obtained by Houston Public Media.

A spokesperson for Union Pacific said the company requested the deadline to collect and evaluate data before determining its next steps.

“We understand the health concerns of those living in this industrial area, and support fair, objective, scientific investigation of this issue,” read a statement from the company. “Decades of testing found no scientific evidence of a creosote exposure pathway to residents. We continue monitoring the situation in accordance with the Texas Commission on Environmental Quality’s rules and regulations.”

The company also provided a website showing the status of the site.

When residents expressed suspicions over the creosote causing illnesses at a town hall meeting in April, the TCEQ requested a report. Samples collected by local health officials found creosote was present in nearby storm drains, which increased concern over air and water quality being affected by the chemical.

More than 80 residents have filed a lawsuit against Union Pacific Railroad Company for more than $100 million in damages, alleging the company is responsible for contaminating properties and groundwater with carcinogens.

The Gibson Law Firm, representing the residents, said that 70 of these residents were diagnosed with cancer or have lost a family member.

Jeff Bell, from Stephens Reed & Armstrong Law Firm, said his firm has also been working with clients for the past month and a half.

“About 13 plaintiffs right now have directly had cancer,” said Bell, who added that they have a total of 30 plaintiffs, and believes the number will grow in the future.

On Monday, residents told their own stories of living in the area.

“My dad died two years ago from anaplastic carcinoma, it developed in his throat,” said Hermenna Coleman, who was raised in the Fifth Ward since she was nine years old. “He had left the area and when he came back, he started drinking this water and it impacted him.”

Donald Anderson, who was born and raised in the area, said that when he was a child he had a virus that doctors couldn’t figure out.

“I remember when I was a kid sometimes when it rained an awful smell would come out, it was like somebody was killing dogs,” said Anderson.

Turner emphasized damages to the community, saying it was unacceptable that many families have been exposed to creosote for such a long time.

“It is important for the cleanup plan to be material, to be credible, and to be reliable, and something that the people can trust,” Turner said.