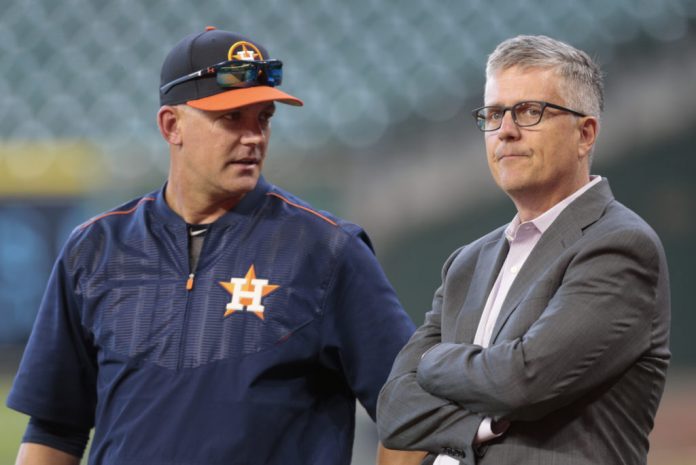 Houston Astros manager A.J. Hinch and general manager Jeff Luhnow were fired Monday after both were suspended without pay by Major League Baseball for the 2020 season.

Astros owner Jim Crane made the announcement at a news conference about MLB’s findings of its investigation into allegations that the Astros stole signs during the 2017 season.

The Astros are also required to forfeit their first- and second-round picks in both the 2020 and the 2021 draft. A fine of $5 million was also leveled against the team. Being described as the largest sign-stealing scandal in the history of baseball, the fine is the highest allowable under the league’s constitution, according to MLB.

“Today is a very difficult day for the Houston Astros,” Crane said, adding that he is going above and beyond the league’s punishment to address the scandal.

A league investigation confirmed the Astros had cheated by using a camera-based sign-stealing system during the regular season and playoffs of their World Series-winning 2017 season and during part of the 2018 regular season.

“I am not a cheater. Anybody who has worked closely with me during my 32year career inside and outside baseball can attest to my integrity. I did not know rules were being broken.”

“I regret being connected to these events, am disappointed in our club‘s actions within this timeline, and I accept the Commissioner’s decision. While the evidence consistently showed I didn’t endorse or participate in the sign-stealing practices, I failed to stop them and I am deeply sorry.”

Future of the Astros

Crane said no Astros players will be suspended because of the scandal.

He said the search for a new manager and general manager will begin immediately and the team “will move as quickly as we can.”

Crane said he believes there are both internal and external candidates that can fill both jobs, but he didn’t release any specifics.