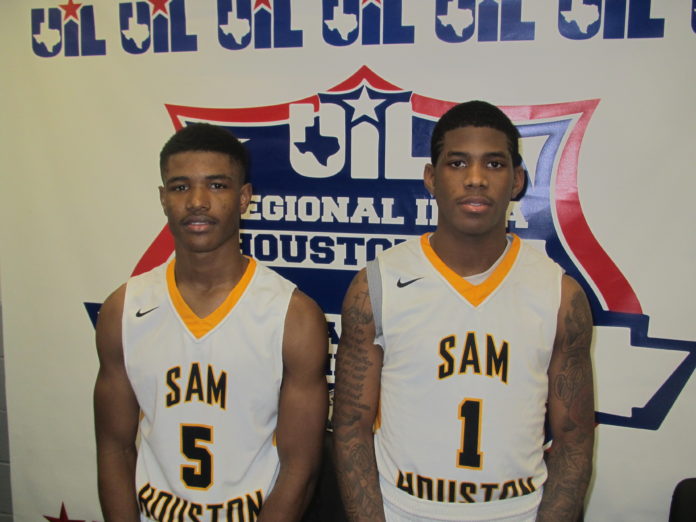 It was the topic of a season-long debate. What team has the best high school basketball backcourt in the Houston area?

Guard Henry Hampton scored a team-high 23 points and made his last four shots in the game, including a 3-pointer, two tear drops and a put-back conversion.

“This cat came to play tonight,” Barreras said. “You talk about big shot after big shot and they were trying to deny him the basketball.

“He came through in a senior moment with the spotlight on and the gym was rocking. The ball found him and he found the basket,” Barreras said.

Despite picking up his fourth personal foul with 4:45 remaining in regulation, point guard Kendric Davis had 13 points and five steals to go along with two made free throws with 21 seconds left in the second overtime that proved to be the game-winning points.

“Any time we go into battle with these two guys we have a chance to win,” Barreras said. “These guys are solid. They are great seniors and I wouldn’t trade them for anybody else.

The Sam Houston victory over the defending state champs avenged a playoff loss to the Eagles a year ago.

“Last year we thought we should have won that game,” said Davis, a TCU commit. “Coming back we knew they were going to give us a test.

Hampton took up the slack when Davis was forced to the sideline after picking up his fourth foul.

“I had to step up and score because at certain points of the game he (Davis) couldn’t,” Hampton said. “When he had to go out with the fourth foul I had to keep the guys up and keep them together until he could come back.”

Sam Houston led by as many as 15 points in the third quarter (37-22) before Cy Falls began mounting a comeback.

“We have a lot of new pieces to go along with Kendric and Henry and it was a team win for us,” said Barreras, who guided the Tigers to the Class 6A state tournament in 2016. “Noah Mason and Chris Green have done a great job for us.

“We won it on the defensive end the way we were supposed to win it. I knew when we got the big lead that they were going to come back on us,” Barreras said. “They are the defending state champions but it just happened to be our night tonight.

“People are going to be talking about this game for quite some time.”