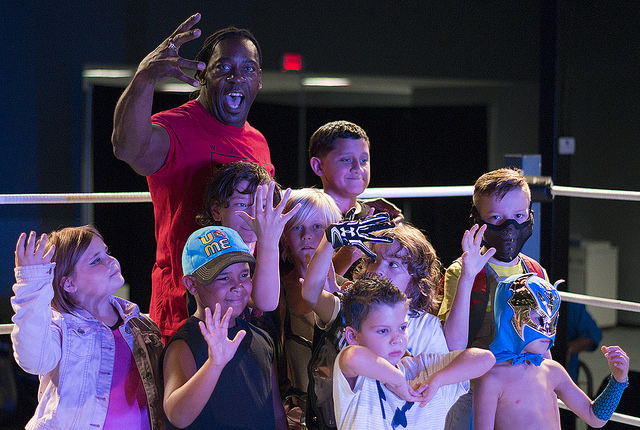 Robert Booker Tio Huffman – professionally known as Booker T – is a hall of fame icon in pro wrestling. The Fifth Ward native competed in the ring for over 28 years. He is a former champion of World Championship Wrestling (WCW), World Wrestling Entertainment (WWE) and Total Nonstop Action Wrestling (TNA).

Booker T can also be seen on local television commercials and heard on his podcast, “Heated Conversations.” He took time to talk to the Defender about the upcoming ROW (Reality of Wrestling) Jr. Kids Camp Wrestling Program.

Booker T:It’s my wife Sharmell’s brainchild. She created it. We are in our third year of doing Kids Camp. The camp is a program for ages 8-15 and it’s a week-long program for beginners, intermediate and advanced students. They get a chance to become and create the character that they want to be. Sometimes they want to create their own characters but sometimes they might want to [imitate stars such as] Finn Balor, “Stone Cold” Steve Austin or Booker T.

By the time we fill this place up on Friday with the parents and the relatives it’s normally a full house. We film it and we produce it just like it’s a real wrestling show and let the kids go out there and have fun. There is nothing like a childhood first and foremost and having one is very special.

Defender: What are some of the values youth learn during the camp?

Booker T: Teamwork is the dreamwork. It’s more important than anything at Kids Camp. Everybody pulls for each other because it’s not about winning or losing or anything like that.  They don’t actually wrestle each other; they wrestle a couple of our students that put the mask on, go out and make everything safe.  Safety comes first. This is not something that you want to try at home because you can really get hurt.  We actually promote that and for these kids to go out there and put that to work for us is pretty awesome.

Defender: What are some of the success stories you have seen as a result of young people attending the camp?

Booker T:We have a lot of success stories. We have one kid who’s deaf and he comes to every Kids Camp. You get a chance to become a superhero on that day. I’ve seen his confidence grow. We have one little girl and she’s been to every Kids Camp. She is one of my most awesome students. She comes out and performs at a very high level.  Her confidence is way over the top and for us to be able to help her gain that confidence is very, very important.  I think that’s what kids camp does for a lot of these kids more than anything.  It lets them know they can be anything that they want to be in life, but it all comes with a little hard work. That is what the week is for – to let them know it’s not just about playing around, you have to really be serious. It starts at a young age and I think these kids are pretty awesome.

Defender: What is your response to parents concerned about safety in wrestling?

What he loves: Family

What he dislikes: Bad drivers