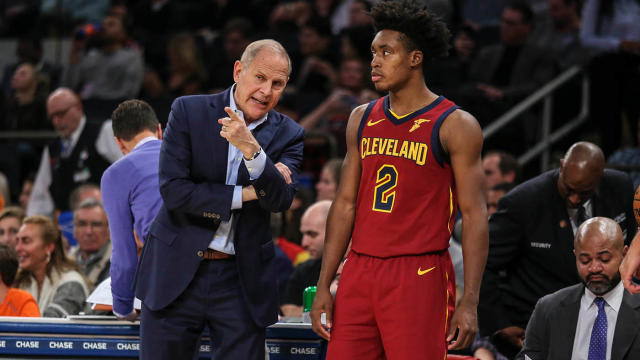 The Cleveland Cavaliers reportedly plan to retain coach John Beilein after he issued an apology for calling players “thugs” during a Wednesday film session.

After stunning his players in a film session Wednesday with a verbal suggestion that they were no longer playing “like a bunch of thugs,” Cleveland Cavaliers coach John Beilein later reached out to players individually to insist he instead meant to use the word “slugs.”

Delivering the term thugs to a group of largely young African American men carries obvious racial connotations, and Beilein acknowledged to ESPN in a telephone conversation Wednesday night that he understood that.

Beilein was wrapping up what had been an off-day film session in Detroit and a hush fell over the room when his players and staff heard the words come out of his mouth, sources said.

The Cavaliers players left the room initially stunned and were increasingly disturbed as they dispersed out of the meeting, league sources said.

Cavaliers general manager Koby Altman was alerted to the issue in the aftermath of the meeting and reached out to Beilein for clarification later Wednesday. Soon after, Beilein said he started to contact his players individually to clarify his words and meaning.

“I didn’t realize that I had said the word ‘thugs,’ but my staff told me later I did and so I must have said it,” Beilein told ESPN on Wednesday night. “I meant to say slugs, as in slow-moving. We weren’t playing hard before, and now we were playing harder. I meant it as a compliment. That’s what I was trying to say. I’ve already talked to eight of my players tonight, and they are telling me that they understand.”

Beilein held the film session at a Detroit hotel on Wednesday and largely derided his players for poor decision-making and execution, sources said.

After signing a five-year contract, Beilein, 66, has been slow to connect with his players and adjust to the NBA in his first year on the job. Beilein has been on the receiving end of significant frustration from All-Star forward Kevin Love and, in some cases, several of the younger core of players whom Beilein had been hired to teach and develop.