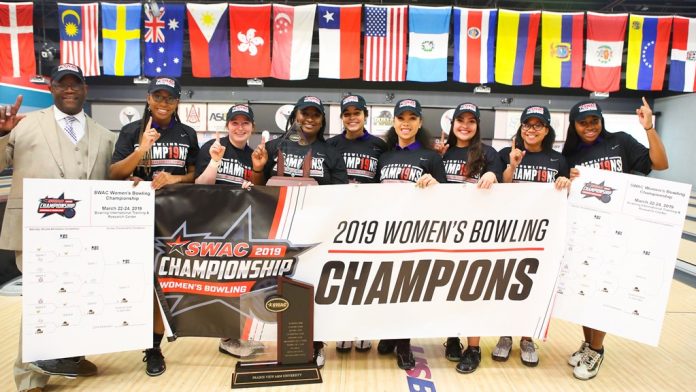 Burton earned her accolades after posting a league-best average pin-fall of 210.04 per game during league play in leading the Lady Panthers to the regular season title. Cline earned her award after finishing with the third-best pin-fall total among all competitors in the conference boasting a 208.22 average.  She bowled a game best of 277 in league play.

“Winning the [SWAC] championship this year was truly a blessing,” said PVAMU head bowling coach Glenn White.  “And I give God all the glory! The team did an unbelievable job in fighting through all of the adversity of losing the first match yesterday by getting swept and then having to win twice to win the championship.

“I am so proud of the effort and resilience that they have shown this season,” White continued. “Alexes Burton continued her great year and really led the team to a history-making year. This win marks the sixth championship for the bowling program in seven years. I can’t ask for much more. Now we look forward to seeing who we will face in the first round of the NCAA championship.”Prairie View, by winning earns an automatic berth to the upcoming NCAA Bowling Championships