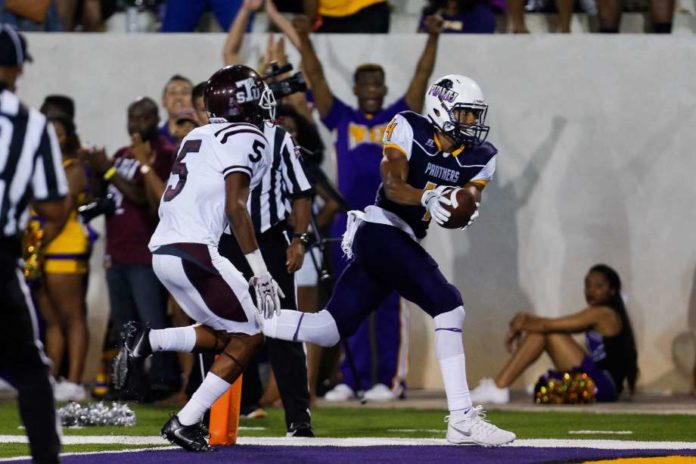 It’s a fact that Prairie View A&M University head football coach Willie Simmons is one of the top young coaching minds in the SWAC. Simmons’ coaching acumen was first put on display as the offensive coordinator at Alcorn State University. Over a three-year period he helped turn the Braves into one of the FCS’s top offenses, winning the 2014 SWAC and SBN Black College National Championships.

Simmons is preparing to enter his third year as the “Top Kat” on the Hill, and the Panthers are out to prove his third year will be the charm as they pursue a West Division crown and an opportunity to win a SWAC championship.

The Panthers’ ascent under Simmons has been steady and sure. In his first year at the helm (2015), the team finished third in the West. Last season, Simmons’ second, they finished third. Could this be the year the Panthers sit atop the West?

PVAMU returns some 50 lettermen and 14 starters from last year’s 7-4 team that posted a 7-2 mark in SWAC play. Of those 14 starters, eight Panthers have earned preseason accolades. Simmons’ teams are 15-6 in his two seasons as PVAMU head coach.

So far Simmons is happy with the Panthers’ work ethic in the spring and as they prepare for the 2017 campaign.

“Our guys have worked extremely hard this offseason, harder than they’ve ever worked before,” Simmons said. “Their bodies have really changed, and their attitudes have been phenomenal. I’m excited to start this camp. I believe this will be our best camp by far.

“I think for the first time in our three years here, we as a coaching staff feel really comfortable with the amount of returning players we have in all three phases,” Simmons continued.

“Our first year, we were a veteran offensive team, and very young on defense. Last year it kind of flipped as we were young and new on offense, with a little bit of experience on defense. This year, we feel we have experience in all three phases – offensively, defensively and we return all of our specialists.

“We really feel good about the amount of experience we have returning. This gives us a ton of leadership and a lot more depth than we’ve had previously,” he said.

Second-team selections are Sta’Fon McCray (RB), Darius Floyd (WR), James Harper (DL) and Joshua Simmons (WR). This gives the Panthers experience and balance at every level except one, quarterback.

There’s an old saying that says if you have three quarterbacks, you have no quarterbacks. Neiko Hollins, Lavell McCullers and Jalen Morton are all vying for the job and all three could see time in the opener against Texas Southern University on Sept. 2 in Houston.

The one Achilles heel for the Panthers has been their defense. While the offense averaged 38.5 points over two seasons, the defense gave up 32 points over the same period. Simmons believes those day are over.

“I see a unit that is ready to take that next step,” Simmons said. “Many of the guys on the field right now defensively were puppies two years ago [freshmen and sophomores]. Now those guys are juniors and seniors. They’ve played a lot of snaps, heard about our woes on defense, and I feel they are playing with a chip on their shoulders. I expect this unit to be one of if not the best unit in the conference.”

If one of the three QBs is able to separate from the pack and the defense holds up, the Panthers could be dangerous, but those are big ifs.

The schedule-makers didn’t do the Panthers any favors. They open against an improving TSU squad in the Labor Day Classic. In week No. 2 they host national titan Sam Houston State for a nationally televised game on Thursday, Sept. 7 at 6:30 p.m. For week three they travel to Thibodeaux, La. to face Southland foe Nicholls State.