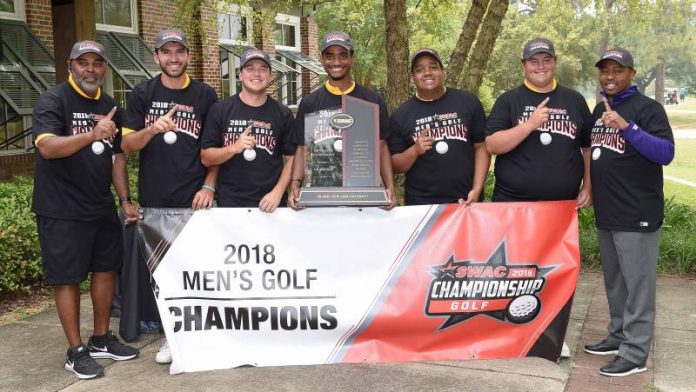 It took nearly 40 years to do it but for the first time since 1979, the Prairie View A&M University men’s golf team won the SWAC championship. Playing at the Oak Wing Golf Club in Alexandria, La., the Panthers annihilated the competition in the 54-hole event.

The Panthers led after every round of the three-day championship, shooting a team score of 891 and pulling away to win by an amazing 31 strokes ahead of six-time defending champion Alabama State (922). Texas Southern finished third (927), Alcorn State fourth (952) and Arkansas-Pine Bluff fifth (1032).

“I’m getting chill bumps in hearing that,” said second-year head golf coach Kevin Jennings, the SWAC Coach of the Year, of the 14th men’s conference championship in program history.

“It’s still a little surreal. I feel like we’re catching manna from heaven and some blessings that I didn’t expect so quickly. I thought we had a good opportunity. For weeks, according to Golfstat, we were the highest-ranked team in the conference, but that’s on paper. We all know you still have to play the matches. These guys went out and did what we needed them to do, which was execute,” Jennings said.

The Panther men first gave an indication that this could be a special year in September with a second-place finish in the prestigious National Black College Hall of Fame Tournament in Atlanta, finishing second in the nearly 20-team field of HBCU programs, and built from there to the recent championship.

PVAMU had the top three spots on the leaderboard, led by Laurence Crea. The Cypress, Texas native earned both low medalist (MVP) and Freshman of the Year honors after shooting three-over par 220 (67-76-77) for the tournament.

Crea’s five-under 67 on the first day of the competition was the only under par round of the tournament and proved to be tone-setter for the week for him and the Panthers.

“For me, and I think for the team, I knew one of our guys was struggling on Monday,” said Crea, who won district championships at Cypress Fairbanks High. “For me, it was about getting as low as I can to help the team out as best as I can. Whether that’s five-under or whatever I could do to get lower was my whole plan to help and lead our team the best way I could.”

The men’s golf title is the first SWAC title that the Panthers have won this academic year. Athletic director Ashley Robinson was elated with the team’s success.

“Since being hired, Coach Jennings has worked tirelessly to improve our golf programs,” Robinson said. “He has quickly elevated the quality and depth of student-athletes on the roster, and we have a competitive team in all areas.

“That internal competition made us better against our opponents and allowed us to have a championship season in only his second year as head coach,” Robinson said. “Coach Jennings earned 2018 SWAC Coach of the Year honors, and we had four players earn First-Team All-SWAC honors, which showed the talent on the team coming together at the right time.”

Prairie View A&M men’s golf will learn its NCAA Tournament destination on Wednesday, May 2 on the Men’s Golf Tournament Selection Show at 4:30 p.m. on the Golf Channel.