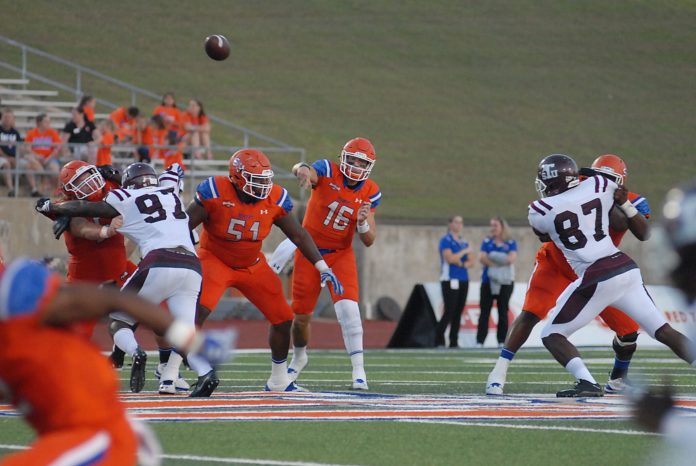 In case you haven’t been paying very much attention to the FCS (formerly known as Div. 1AA) national polls, there’s a local school atop the polls. The Sam Houston State Bearkats with a perfect record of 8-0, are the top team in the nation for the third week. Ranked #2 in the land all season, Sam Houston ascended into the top spot when North Dakota State, ranked #1 previously, was defeated (10/15).

The Kats success this season should come as no surprise. Since 2011, Sam Houston’s 63-19 record is second only to North Dakota State’s 77-6 record among FCS schools. Sam’s record is 4th best among all D1 schools behind ND State, Alabama and Clemson.

Known for their explosive offense, Sam leads the entire FCS in scoring averaging 52.4 points per game and 592 yards of total offense per game. Jr. quarterback Jeremiah Briscoe (Houston Stratford) has thrown for over 400 yards 3 times this season.

Despite the gaudy offensive numbers, Sam Houston head coach K.C. Keeler acknowledges that his team has been functioning well in every phase of the game.

“We have the #1 offense in the country, we’re playing really well on special teams and we’re starting to make a really nice move with our defense,” Keeler said. “We have all three phases working.”

“Our offensive guys will tell you, the best defense they see week in and week out is our defense,” Keeler continued. “I think we have a dominant defense. This might be the best team I’ve coached in terms of special teams.”

The top catalyst for everything the Kats do is predicated on the extremely fast pace they operate offensively, which fuels their total team success.

“We come out fast and we talk a lot about coming out fast. It’s something that’s drilled into our guys from the very beginning,” Coach Keeler shared. “We’re going to come out and be very aggressive at a fast tempo (offensively). If we don’t make some plays offensively we do a pretty good job pinning them down (punt game) and getting field position and then we put more pressure on you (defensively).”

“I just got to make the right decision and see where we can attack a defense,” Briscoe conceded. “We have four of the best backs in the country. It really makes my life easy with the skill players that we have and the offensive lineman that we have. We can really just take whatever the defense is going to give us. It doesn’t matter how, we’re going to beat you. We’ve shown that in different games this year where we’ve beaten teams doing different things offensively.”

Coach Keeler and the Bearkats embrace the honor of being the #1 ranked team in the nation.

Keeler believes the 2016 Kats are a special group of players.

“They have a mindset in practice that is special,” Coach observed. “They hold each other accountable. They have a lot of intangibles we all want to have, leadership, chemistry, work ethic, all those things are there. They’ve done a great job taking ownership to be the best team in the country.”

With their lofty ranking the Bearkats know they can expect every opponents best.

“We got the guys tee shirts last week with the biggest bullseyes you could possibly fit on them,” Coach K said. “I think they do realize we’re going to get everybody’s best game. Recently at Nichols State the best selling point down there was “see history, see Nichols State for the first time beat the #1 team in the nation.”

As the regular season winds down and the playoffs loom on the horizon, Keeler and staff are careful to regulate their time to avoid peaking too soon.

“We do a lot of things to try and keep our guys fresh. We’ve taken 15 minutes off practice, so we’re on the field at 8 in the morning, we’re off at 10 now,” Keeler explained. “On Thursday we’re off at 9: 30. We do a good job of getting those guys in the ice tub. We are very in tune with their body and how things are going and I think we do a good job of making sure we don’t burn them out. It’s a long season and our goal is to play until sometime in January.”

The first round of the NCAA FCS football playoffs begin November 26th. The championship game is January 9th in Frisco, Texas. The Bearkats plan to be there.