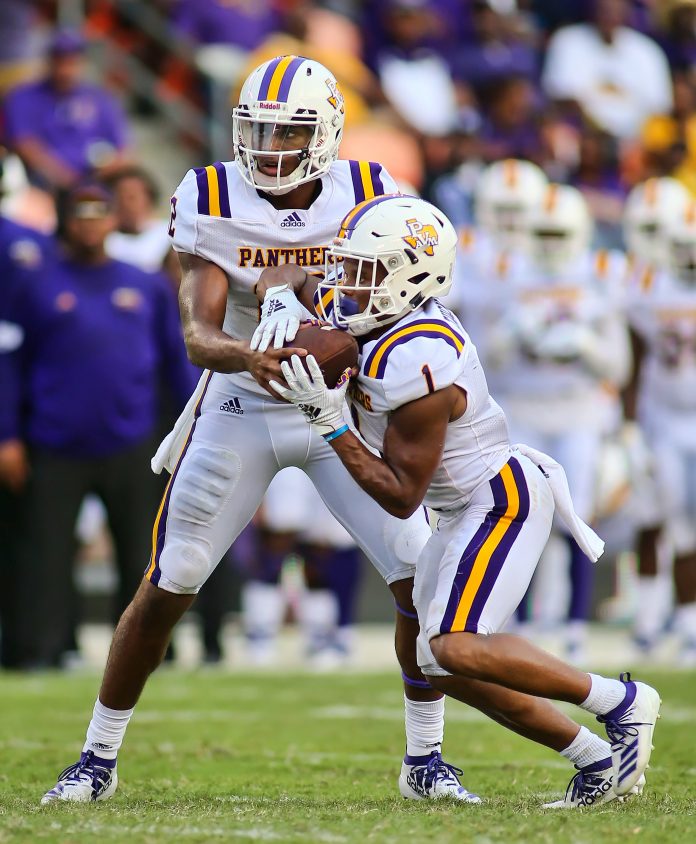 As soon as the subject of Prairie View running back Dawonya Tucker comes up, quarterback Jalen Morton smiles big and then superlatives just seem to flow.

Morton can’t seem stop when it comes to the versatility of the senior back who plays well above his 5-foot-5 stature.

“He’s a different breed,” Morton said. “He has speed, he has vision, he can catch out of the backfield. It’s not only off of me, but the pressure is off of everybody. When he gets in the game, who are you going to look at?”

But as spectacular of a runner as Tucker is out of the backfield or catching passes, similar praise can be heaped on many of the Panthers offensive players whether its All-SWAC preseason receiver Tristen Wallace, speedy receiver Tony Mullins or Morton making plays with both his arm and legs.

The seemingly endless number of skilled offensive playmakers is the primary reason PV had the most prolific offense in the SWAC last season and more of the same is predicted in Eric Dooley’s second year at the helm. Dooley believes in the talent that makes his offense go.

“We are going to continue to do the things that benefit us, but I’m blessed to have a lot of weapons on offense, a lot of guys who can do a lot of different things,” said Dooley, whose 1-0 Panthers travel to take on the Houston Cougars (0-1) on Saturday night. “This young man (Tucker) sitting to left of me, he don’t want me to say his height but he played big. Then we have a quarterback that … I don’t like to throw names around but he is as big as any quarterback in the National Football League and has a strong arm and can run.

“When you have players of this magnitude it gives you more that you can do offensively, but we still have some work to do and we look forward to it.”

Just how explosive the offense can be was on full display during Saturday night’s Labor Day Classic comeback, 44-23, win over conference and area rival Texas Southern. The Panthers, primarily behind explosive running of Tucker, scored 24 unanswered points during a stretch from the second quarter to early in the third to rally on the way to the victory over the Tigers.

Prairie View amassed 615 yards of offense with Tucker leading nine different ball carriers with 188 yards rushing while Morton passed for 350 yards while completing passes to nine different receivers. Mullins led the receivers with six catches for 141 yards on a night when Wallace was limited to just four catches for 45 yards.

Tucker says every game the Panthers play can be as high powered as long as everyone comes with the right attitude.

“You come to the table and do what you are supposed to do and you are going to eat.”

As potent as the offensive weapons are, both Morton and Tucker agree that the catalyst is the offensive line that they dub The Great Wall. The front five is anchored by All-SWAC preseason honorees Dejohn Jones and Danny Garza.

“At the end of the day it’s the Great Wall is what I call them,” Morton said. “They are the stars. It starts with them.”