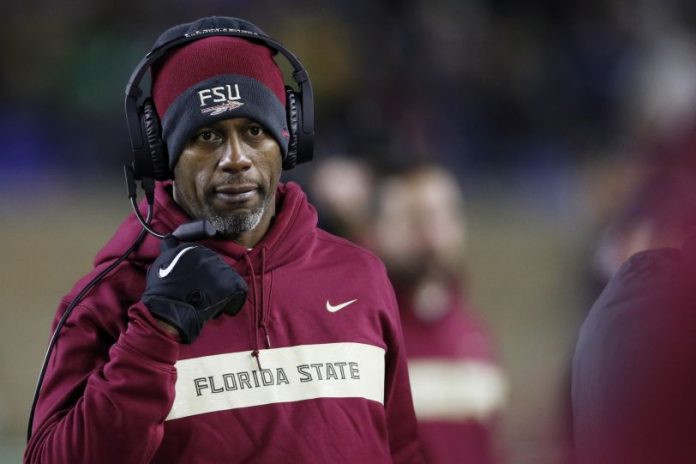 The state’s attorney in Florida was investigating a racist social media post as a potential threat to the safety of Florida State University football head coach Willie Taggart, who was the subject of a meme depicting him being lynched that a team fan posted on Facebook.

It’s not out of the ordinary for sports fans to direct their frustrations at a head coach after a disappointing season with more losses than wins. In fact, that’s pretty standard across all sports.

What should be unexpected, though, is reacting with racism, which is apparently what one fan of the storied Florida State University football program did after the season ended with a blowout loss to their in-state rivals from the University of Florida on Saturday afternoon. But that’s precisely what happened, with first-year Florida State Head Coach Willie Taggart, who was the target of a fan’s scorn on social media.

Screenshots preserved on social media showed that a Facebook account associated with the name Tom Shand posted a black-and-white picture of a Black man being lynched with Taggart’s face superimposed on the image. The meme was accompanied by the words: “BELIEVE IN SOMETHING … EVEN IF IT MEANS SACRIFICING YOUR REP.”

When someone commented on the meme and questioned whether Shand was “serious,” he doubled down and responded: “I’m dead fucking serious. This is how far I’m willing to get rid of this clown!!!”

The comment was likely to revive the conversation surrounding lynching, as one U.S. Senate candidate said earlier this month that she would eagerly attend a “public hanging.”

Roland Martin tweeted that Shand had already deleted his social media accounts, but a LinkedIn page for a person named Tom Shand was still live. It said that Shand, listed as a “Club Counselor at Grand Hilton Vacations, attended Florida State from 1997-2000 before leaving with a 2.9 grade point average.

Taggart has been under heavy pressure from fans and alumni after being hired as the college’s first Black head coach. Saturday’s loss to Florida confirmed the Seminoles wouldn’t be playing in a postseason bowl game for the first time in 36 seasons. There is already a glaring lack of Black head coaches in college football, but that number shrinks exponentially when it comes to the so-called “Power 5” conferences of the most competitive programs. Florida State is in the Atlantic Coast Conference, a Power 5 conference.

By all means, Taggart was an exception to the rule. According to Diverse Issues in Higher Education, “the rise to head coaching positions in college football has been more difficult for Black coaches.”

Shand’s resort to racist tactics was extreme, but other Florida State fans have gone so far as to start a GoFundMe account to buy out Taggart’s contract. Taggart inherited players who he didn’t recruit, something that can many times affect how a team plays. He has consistently asked fans for their patience, to no avail.

On Saturday, he apologized to fans and vowed to turn the program around. But apparently, Tom Shand wasn’t listening.