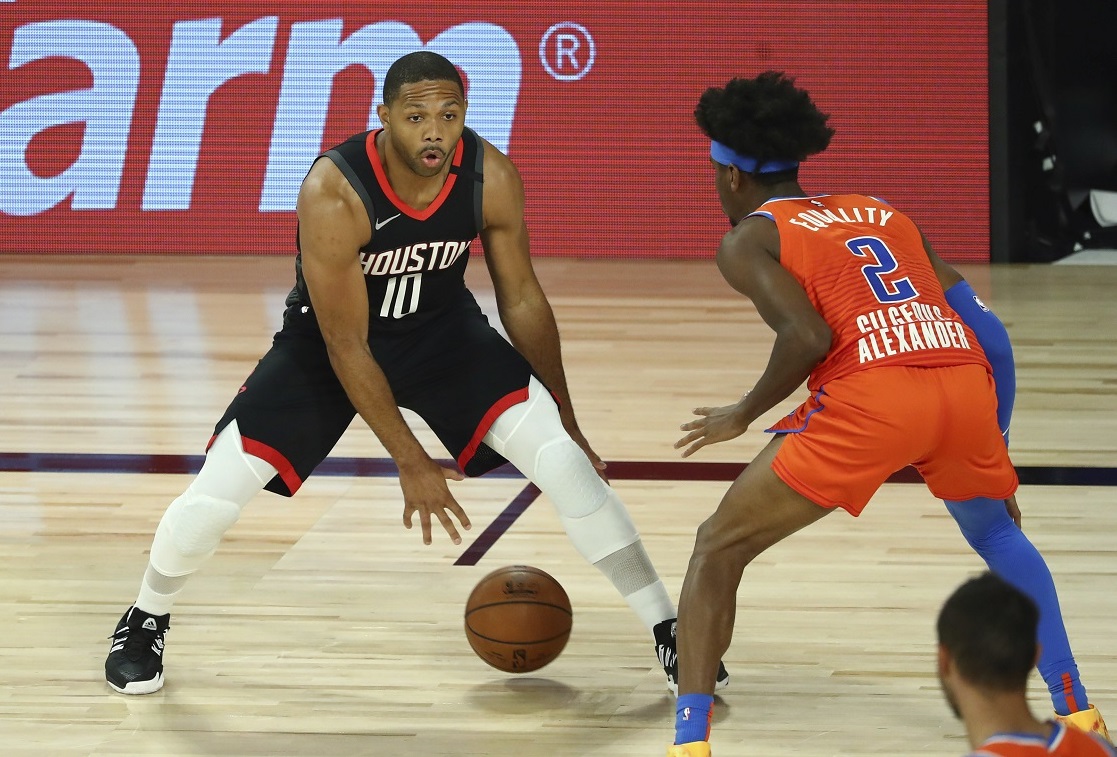 No Russell Westbrook. No problem.

The Rockets got off to impressive 1-0 start in their Western Conference first-round playoff series against Oklahoma City, getting production from several different places in the absence of the All-Star in order to pull off the 123-108 neutral court win in Orlando on Tuesday night.

James Harden was, off course, his high-scoring self, finishing with 37 points and nine rebounds to lead the way. But the key to the victory was production of Jeff Green off the bench and Eric Gordon, who started in place of Westbrook.

Green, a midseason veteran acquisition, finished with 22 points while Gordon added 21 points and four assists in the absence of Westbrook, who is out with a quad injury.

“It’s key,” Harden said. “We’re not sure when Russ is going to be back so it’s an opportunity for guys to step up and play big minutes and contribute to big-time games.

“Obviously Eric and Jeff played really well tonight, P.J. (Tucker) played well on both ends. It was just a total team effort and we are going to need that consistently from each individual.”

But Green was definitely the catalyst off the bench. But Harden didn’t seem surprised at all by Green’s performance.

“I’m not impressed,” Harden said of Green’s performance. “I’ve been knowing Jeff since I was a rookie as far as being a teammate so I know what he is capable of. He has been Jeff. He is confident, he is making plays off of the dribble, defensively he is guarding one through five. He’s being a playmaker, getting guys shots. He is just doing things that he has been doing all of his entire career.”

It was exactly the performance the Rockets needed as questions loomed about how well the Rockets could play without Westbrook on the floor to take some of the pressure off of Harden. The hot shooting Rockets kept the Thunder off balance all night with critical baskets coming from a lot of different directions.

The Rockets knocked down 20 3-point shots and shot nearly 49 percent from the floor.

“That’s what we have to do with one of our big guns out,” Green said. “It’s a team effort. We have to continue to go out and attack as a team. We can’t allow James to be the one to go out there and put us on his back.

“We have to take some pressure off of him and tonight was a good start.”

But it wasn’t just the Rockets offense that was impressive, their defense turned into a transition game with easy buckets coming off of turnovers. The Thunder committed 12 turnovers and in the critical first quarter shot just 30% from the floor to allow the Rockets to open up a sizeable lead.

Clearly, the Thunder had trouble keeping up with the Rockets small ball lineup, which they shifted to around midseason when they shipped center Clint Capela off and opted to put 6-foot-5 Tucker in the post to defense NBA bigs. It seemed to work perfectly Tuesday night with the Rockets’ shooters knocking down big shots.

“That was the reason for it, create and generate open shots for shooters. We did that tonight,” Harden said of the Capela trade. “We didn’t get a lot of credit for our defense and our defense was really good, especially at the beginning of the game and it’s going to have to be that way. We are going to have to rely on defense to generate easy buckets on offense. I think tonight was good start for us.”

The performance without Westbrook was critical because his availability for the series seems very much in question, despite the Rockets game-by-game approach with his injury.