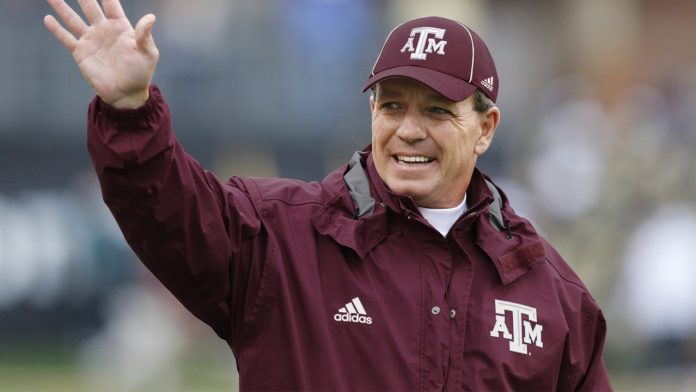 In College Station, the athletic department at Texas A&M University has concluded that spending the most money on a head football is the key to success. That’s why they’ve invested in former Florida State University head coach Jimbo Fisher to guide the Aggie program.

Fisher, hired in December, was brought in to the tune of a 10-year, $75 million-dollar contract. A&M faithful are gambling that Fisher will be the man that can propel Aggie football to the top of the Southeastern Conference (SEC) food chain.

The Aggies have averaged eight wins per season over the last five years but those totals don’t match the expectations A&M has for a program playing in college football’s premier conference.

With Fisher at the helm, fans are already trying to predict how long it will take for the Aggies to compete for a national title.

“I think your timetable is as quick as you can put things in place and everyone buys into what you’re trying to do,” Fisher said. “You have a timetable; your timetable is now. You want to win immediately and that’s your place, but is that realistic?  I don’t know. It’s all about the process of putting things in place because you want to build a program the right way up and get kids to understand and buy in.”

What are the characteristics of a Jimbo Fisher coached team?

Fisher should be pleased to find that the cupboard he inherited is not bare. A&M returns 16 starters from 2017, eight on each side of the ball. Unfortunately for Fisher there is not a proven guy at quarterback.

Sophomores Kellen Mond and Nick Starkel are dead even in the QB contest heading into preseason practice. Fisher has a reputation as a quarterback groomer and that talent will be immediately put to the test developing these talented but raw candidates.

Whoever wins the QB race will feel secure in knowing he’s sharing the backfield with running back Trayveon Williams (junior). The Houston native led the Aggies in rushing last season with 798 yards. Expect Kendall Bussey and Jacob Kibodi to provide depth.

The receivers will be long on talent but short on experience. Jhamon Ausbon started every game as a freshman in 2017. Expect Cam Buckley, Kendrick Rodgers, Hezekiah Jones, Roshauud Paul and Clyde Chriss to all be in the mix. In addition, the Aggies will feature a tight end in the offense for the first time in many a moon. Jace Sternberger, the spring practice MVP, gets the nod there.

Center Erik McCoy is a fixture in the middle of the offensive line, but there are question marks all around him. Expect Jared Hocker, Connor Lanfear, Keaton Sutherland and Grayson Reed to all battle for snaps at the guard positions. Carson Green, Kellen Diesch and Dan Moore will all compete for time at the tackles.

Defensively, the Aggies will be stout in the middle of the D-line. Kingsley Keke, Justin Madubuike, Daylon Mack and Jayden Peevy should give opposing offenses the blues. Defensive end Landis Durham returns as the SEC leader in sacks. He will partner in crime with Tyree Johnson, Michael Clemons and Ondario Robinson.

Tyrel Dodson, Otaro Alaka and Buddy Johnson are all playmakers at linebacker.

Donovan Wilson and Derrick Tucker are headhunters at safety. Cliff Chattman and Charles Oliver should start at the corners.