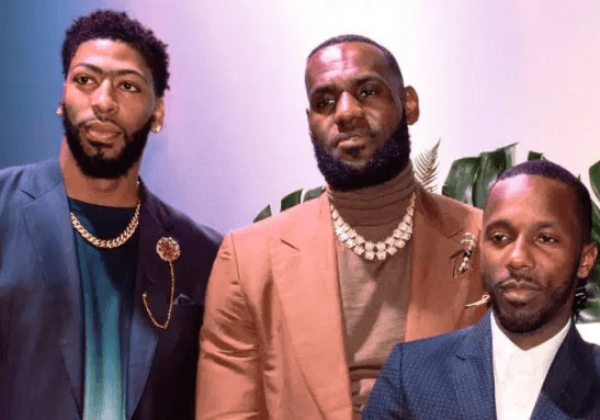 In the memo, obtained by ESPN, the NCAA outlined new criteria for agents: a bachelor’s degree, NBPA certification for at least three consecutive years, professional liability insurance and completion of an in-person exam taken in early November at the NCAA office in Indianapolis.

The bachelor’s degree requirement has led some to refer to it as the “Rich Paul Rule.” Paul, who represents LeBron James, Anthony Davis, Ben Simmons and Draymond Green, among others, and recently brought his Klutch Sports Group under the United Talent Agency umbrella, began working with James a couple of years after high school and didn’t graduate from college.

James weighed in on the new certification requirements via social media Tuesday. 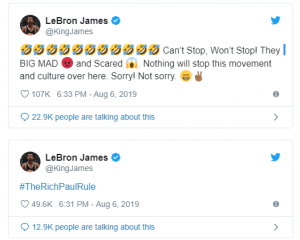 LeBron — who dubbed the new criteria the “Rich Paul Rule” — doesn’t see it that way … tweeting “Can’t Stop, Won’t Stop! They BIG MAD and Scared. Nothing will stop this movement and culture over here. Sorry! Not sorry..”

According to the new NCAA criteria, Paul wouldn’t be able to represent underclassmen testing the NBA draft waters.

Agents also will need to fill out an application and clear a background check.

“Although some can and have been successful without a college degree, as a higher education organization, the NCAA values a college education and continues to emphasize the importance of earning a degree,” the statement read. “We were guided by recommendations from the Commission on College Basketball — which spoke with the agent and advisor community — that the NCAA certification process should be more stringent than current processes.

“With this in mind, we benchmarked our new rules against requirements for other organizations that certify agents, like the NBPA, which also requires agents to have a bachelor’s degree. While different and distinct, our rules taken together, which is the manner they were meant to be examined, provide a clear opportunity for our student-athletes to receive excellent advice from knowledgeable professionals on either the college or professional path they choose.”

In the application, sources told ESPN, agents are required to agree that they will cooperate with the NCAA in investigations of rules violations, “even if the alleged violations are unrelated to [their] NCAA-agent certification.”

Agents who complete the application and background check will take the in-person exam on Nov. 6, the day after the college basketball season begins with the Champions Classic in New York.

Agents who meet every requirement besides the three-year NBPA certification can receive an exception if the student-athlete they represented this past spring decided to return to school.