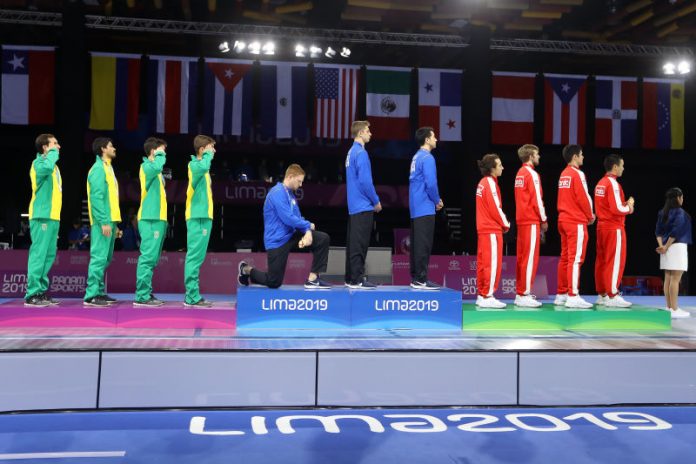 Two American gold medalists were put on probation for a year as punishment for their decision to demonstrate during the National Anthem at the 2019 Pan American Games.

US Olympic & Paralympic Committee Chief Executive Officer Sarah Hirshland wrote to hammer thrower Gwen Berry and fencer Race Imboden, saying “while I respect your perspective—and that of every athlete for whom I’m lucky enough to serve—I disagree with the moment and manner in which you chose to express your views.”

During the award ceremony of the 2019 Pan American Games, Imboden, an American gold medalist fencer, made headlines after his decision to call attention to racism, treatment of immigrants, and a myriad of other issues plaguing the United States by taking a knee on the podium. While elsewhere, Berry, a fellow gold medalist, raised her fist at the end of the national anthem in a similar display of civil disobedience harkening back to John Carlos and Tommie Smith.

And if Hirshland expects either athlete to apologize or express remorse for their decisions, she’s in for a rude awakening.

In a series of tweets following his protest, Imboden made it perfectly clear where he stood:

We must call for change. This week I am honored to represent Team USA at the Pan Am Games, taking home Gold and Bronze. My pride, however, has been cut short by the multiple shortcomings of the country I hold so dear to my heart. Racism, Gun Control, mistreatment of immigrants, and a president who spreads hate are at the top of a long list. I chose to sacrifice my moment today at the top of the podium to call attention to issues that I believe need to be addressed. I encourage others to please use your platforms for empowerment and change.

Prior to participating in this year’s Pan American Games, participants were required to sign an agreement that prohibited making any political, religious, or racial remarks or demonstrations. Yet, despite being placed on probation, both athletes will still be allowed to participate in sanctioned events, which, thankfully, won’t prevent Berry from competing next month in the 2019 World Championships in Doha, Qatar.

But for other athletes considering following suit with protests of their own, Hirshland warned of “more serious sanctions” in her commitment to remain on the wrong side of history.

“It is also important for me to point out that, going forward, issuing a reprimand to other athletes in a similar instance is insufficient,” Sarah Hirshland wrote in the letters sent Tuesday.