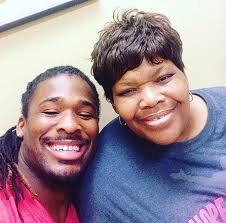 Former NFL player DeAngelo Williams has turned the pain of losing his mother to breast cancer into something positive. According to Today, the former Pittsburgh Steelers running back has funded mammograms for 500 women over the past five years.

For Williams the initiative—which was organized by the DeAngelo Williams Foundation—was personal. The disease is something that has devastatingly impacted his family. His mother Sandra Hill succumbed to her battle with breast cancer 13 years ago and four of his aunts passed away from the disease as well. In honor of his mother—who died when she was 53—he decided to launch a campaign dubbed “53 Strong for Sandra” where he hosted mammogram screening events for 53 women in North Carolina who didn’t have adequate insurance coverage.

Since launching the project, his foundation has expanded its reach far beyond North Carolina and has held screening events throughout the country in states including Arkansas, Tennessee, and Pennsylvania. The organization also provides funding for treatment for women in need. “This can be life-changing for these women,” Williams told the news outlet. “We are enabling them to get this care that no one should ever be denied or not have access to.”

Initiatives like the one created by his foundation are needed. According to research conducted by the Centers for Disease Control and Prevention, Black women die from breast cancer at a higher rate than white women. Medical professionals say that the underrepresentation of Black women in breast cancer research leads to the lack of effective treatment options and socioeconomic factors are tied to the alarming trend. “About 40% of health is driven by social and economic factors,” Dr.Timiya Nolan told Forbes. “We also know that these women face more stress-inducing environments with the experience of racism and discrimination, low healthcare access and/or knowledge of resources, and even challenging encounters with healthcare providers.”

October is Breast Cancer Awareness Month; an annual observance created to celebrate individuals who have battled the disease and support education and research initiatives.