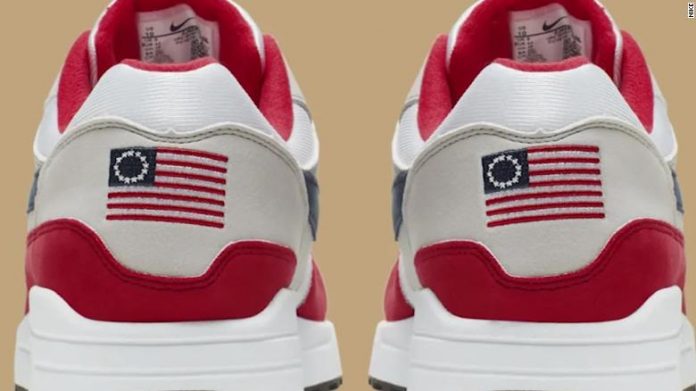 A former Republican lawmaker, Bruce Poliquin, from Maine is hoping to spark a boycott of Nike for pulling its Betsy Ross flag sneaker from the shelves after Colin Kaepernickcomplained.

Instead, Bruce Poliquin is asking other outraged conservatives to support New Balance, which makes its sneakers in Maine, according to Yahoo.

“AMERICA, HERE’S AN IDEA,” Poliquin wrote on a Facebook post on Tuesday. “Since Nike, who makes their shoes out of the country, just BANNED a new ‘Betsy Ross’ sneaker because of a claim the colonial flag from our nation’s founding is now controversial; why not buy American? This shoe for instance, made by New Balance which employs hundreds of our fellow U.S. Citizens, right in the great state of Maine. As we are celebrating our nation’s independence what better time than to buy American?”

Kaepernick objected to Nike’s Air Max 1 Quick Strike Fourth of July sneaker for including the first U.S. flag imprint, featuring 13 stars and stripes. This flag was used during America’s era of slavery and is offensive to many people of color.

A spokesperson from New Balance could not be reached for comment. However, a reported New Balance employee offered a reply to Poliquin on Facebook, according to Yahoo:

“Thank you Bruce Poliquin for always supporting us. This August will be my 23rd year working for New Balance,” in which Poliquin replied: “Maine workers are the best! Thank you for the note.”

Also joining the anti-Nike crusade is Senator Ted Cruz who posted on Twitter with the hashtag #WalkAwayFromNike.

“I love America. I stand for the anthem, respect the flag & honor the men & women who fought to defend our Nation,” Cruz tweeted. “I respect Free Speech & I’m exerting mine: until Nike ends its contempt for those values, I WILL NO LONGER PURCHASE NIKE PRODUCTS…”

Nike’s decision to pull the sneakers came after some of the sneakers had already been delivered to retail stores. The sneaker was priced at $140 and featured the Betsy Ross version of the flag, which was used in the United States from 1777 to 1795