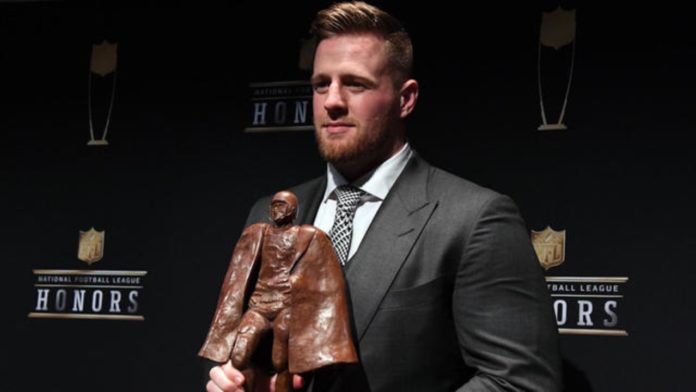 Considered one of the league’s most prestigious honors, the Walter Payton NFL Man of the Year award was recently awarded to Texan defensive end J.J. Watt. The award recognizes a player for his excellence on and off the field.

In the wake of Hurricane Harvey, Watt solidified his importance to the city of Houston by being an unwavering fixture of hope. While watching the events unfold from a hotel room in Dallas, Watt posted a video on social media announcing a fundraising campaign with a reasonable goal of $200,000, to which he matched the first $100,000.

In 19 days, he raised more than $37 million. Watt has dedicated himself to finding organizations that will apply the funds in the way he has promised the donors and victims of Harvey. He announced a plan with strategic partners, making good on his promise to ensure that every dollar goes directly to the people of Houston and its surrounding areas that are in need.

Watt’s dedication to charitable service began at a young age when the thought of being in the NFL was still just a dream. He started the Justin J. Watt Foundation in Wisconsin in 2010 out of a desire to help underserved kids. His personal motto of “Dream Big, Work Hard” culminated into a mission that he continues to use to impact communities nationwide.

He said he was inspired by his parents to give back.

“They taught me from an early age that – we’re not rich, but we’re not poor and there’s people out there who have a very difficult time and we’re fortunate,” he said. “So, give back whenever you can. I think throughout my whole life, for me, I’ve been able to go to a good school, have a hot meal on my dinner table every night.

“This award is called the Man of the Year Award, but I promise you it is so much bigger than just one man,” Watt continued. “This award is about the inherent good that lies within humanity. It is about the city of Houston and its ability to overcome adversity at a time where it all seemed lost.”

Watt was one of three finalists for the award along with Carolina Panther tight end Greg Olsen and Baltimore Raven tight end Benjamin Watson.

“I had a chance to spend a lot of time with both Greg and Benjamin, the other nominees for this award,” Watt said “And there’s one thing that I know, it’s that I wouldn’t rather share this nomination with any two other guys than them. They represent everything that’s right about this league, they represent everything that’s right about the players in this league and giving back to the community.”

The award was established in 1970. It was renamed in 1999 after the late Hall of Fame Chicago Bears running back. Each team nominates one player who has had a significant positive impact on his community.

As a finalist Watt had an opportunity to meet Walter Payton’s family. It was a visit that drove home the significance of the award.

“We also had a chance to spend some time with the Payton family, the beautiful Ms. Connie [Payton’s widow], her daughter, Brittney, and son, Jarrett. I cannot express how humbled and honored that I am to be mentioned in the same sentence as Walter Payton, a man who did everything right, not only on the field, but also off of it, and I’m going to continue to try and live that legacy and make that family proud, so thank you all for supporting me.”