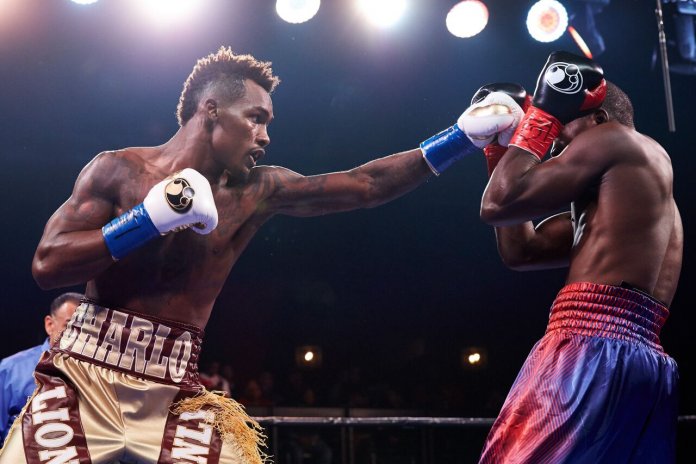 For the first time in many a moon, championship boxing returns to H-Town. Unbeaten Houstonian and WBC interim middleweight champion Jermall “the Hitman” Charlo (28-0-21 KOs) defends his title against top contender Brandon “the Cannon” Adams (21-2-13 KO’s).

The showdown takes place Saturday, June 29 at NRG Arena and is presented by Premier Boxing Champions.

For Jermall, who one is half of an accomplished duo (his twin brother Jermell is a former light middleweight champ), it will be his first professional bout in his hometown in seven years.

“I feel awesome and I’m well prepared. It’s an amazing feeling to be fighting in my hometown,” he said. “To have my own card at this level and on this stage, it shows the support Houston has for me.

“I get a lot of juice from the hometown crowd,” Charlo continued. “Just having my family there alone is what I really need to get the nerves and excitement to where I need them. I’m going to be comfortable and I’m going to stick to my game plan. I’m not here to make mistakes.

“It’s going to be fireworks,” he added. “I’m coming for the knockout every time. Houston is hot and the heat is going to be there fight night. I’m going to do what I normally do and give the crowd excitement.”

Charlo’s trainer, Ronnie Shields, has an impressive resume featuring champions that he has trained, including Evander Holyfield, Mike Tyson, Pernell Whitaker and Arturo Gatti. He explained what makes Charlo such a great young talent.

“This kid has such a strong work ethic and hunger for the game, and that’s a common theme that you see in great champions,” Shields said. “He’s a tireless worker in the gym. He watches film and he studies his opponents. You never have to worry about him stepping into the ring ill-prepared.”

For Adams, a proud native of Los Angeles’ Watts neighborhood, the opportunity to fight for a title, even in the champion’s backyard, was something he could not pass up.

“I didn’t expect my road to be easy because it’s never been easy for me,” Adams said. “I’m on the road and I understand that. I’m prepared to pack my bags and go wherever I need to, so that I can become what I’m supposed to become. The best man will win on June 29.”

Adams, the winner of the 2018 “The Contender” reality TV elimination tournament, said he feels no additional pressure fighting in Houston.

“It was pressure every time I fought on ‘The Contender.’ Each round [had] quality opponents leading up to the final and all of that will prepare me for Charlo. He deserves everything he’s gotten and I respect him as a man, but I’m going to take advantage of this opportunity.”

“Fans should come to the fight and support Jermall because he’s Houston’s own,” Shields said. “He grew up here, fought as an amateur here, turned professional and stayed right here in Houston. He had opportunities to relocate to other cities, train in other locations, but he has remained in Houston. He’s proud of his Houston heritage and proud to bring his championship defense to his hometown.”

Live at NRG Arena or on Showtime