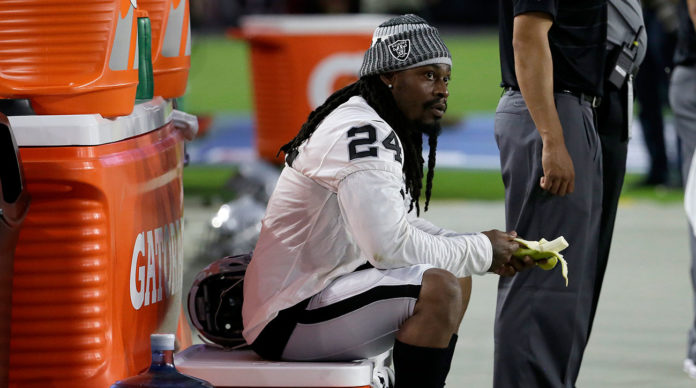 Marshawn Lynch has always been a man who marched to his own drum.

Frankly, I think he’s a genius who’s laughing at all of us; for me that was confirmed when he was one of very few high profile NFL players who came out in support of Colin Kaepernick’s principled stand for Black lives last year.

Last September, the man of few words (at least not those on command) so eloquently stated that he’d rather see Kaepernick “take a knee than stand up, put his hands up and get murdered.”

And on Saturday, as the world watched Charlottesville, Va., descend into racist madness, Lynch sat on a cooler while the National Anthem played during the Oakland Raider’s opening preseason game against Arizona.

According to USA Today, Raiders coach Jack Del Rio said he was unaware Lynch would sit for the anthem, but said that his actions were a “non issue.”

“[Lynch] said, ‘This is something I’ve done for 11 years—it’s not a form of anything other than me being myself,’” Del Rio said in a postgame news conference. “

Lynch didn’t play in Saturday’s game against the Cardinals, and had already left the stadium by the time media was granted access to the locker room.