Who knew a simple tweet that that stated, “Fight for Freedom. Stand with Hong Kong” could be the beginning of a cold war between China and the NBA?  But it has.

And what we have seen and heard from the NBA – the supposed most woke professional league in the United States – has been disappointing to say the least. Initially the NBA deemed Morey’s comments as “regrettable” and “offensive.”

Then as the Rockets were getting set to play a preseason game in Japan, Rockets owner Tilman Fertitta tossed his general manager under the bus with this gem of a tweet, “Listen … @dmorey does notspeak for the @HoustonRockets. Our presence in Tokyo is all about the promotion of the @NBA internationally and we are nota political organization.”

Even Rockets star James Harden chimed in with maybe the most non-sensible condemnation of Morey of them all. “We apologize. We love China. We love playing there…We appreciate them as a fanbase. We love everything there about them and we appreciate the support that they give us individually and as an organization. We love you.”

This was in done in response to swift movement by the Chinese government and Chinese Basketball Association to disassociate from the NBA as punishment for Morey stepping out of line. China said it was cutting ties with the league it fawns over and the NBA caved.

The clear message the NBA sent in trying to smooth over Morey’s tweet, which had since been deleted, was that business and tapping into the riches China has to offer the league surpassed human rights.

Of course, feeling the backlash from U.S. politicians and the fans in this country, the NBA realized it was even worse for back home to seem like it turns a blind eye to clear human rights violations and the idea of Freedom of Speech – something Americans cling to. NBA players, more so than any other professional league, freely speaking out on social issues.

NBA commissioner Adam Silver attempted to clean up the distancing from Morey with a statement released early Tuesday morning.

While the damage had already been done, Silver saved the NBA from looking like the hypocritical league with his words. The NBA, after all, seemed like the most progressive league on social issues based on its ripping a franchise from the former owner of the Los Angeles Clippers after his racist comments came to light and it removed it removed its All-Star game from Charlotte a few years back due to the state’s anti-transgender bathroom bill.

“Values of equality, respect and freedom of expression have long defined the NBA – and will continue to do so,” Silver wrote.  “As an American-based basketball league operating globally, among our greatest contributions are these values of the game.”

Perhaps going forward the NBA may want to make sure before aligning with countries for profit that that nation’s values and views on human rights aligns with the country it represents. 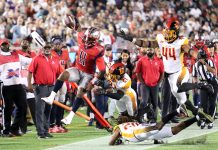