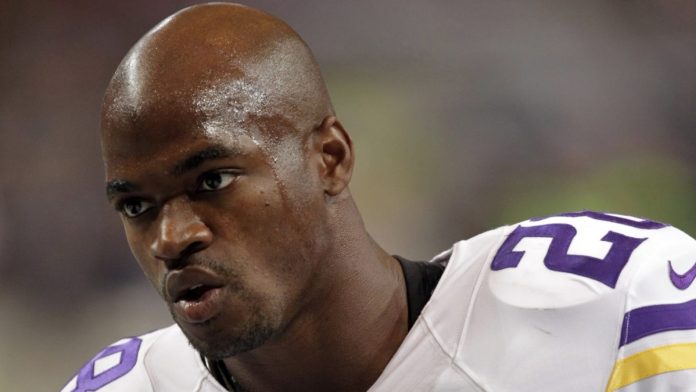 Washington Redskins running back Adrian Peterson has amassed nearly $100 million dollars throughout his football career, but now he’s knee-deep in debt for “trusting the wrong people,” his attorney said.

At issue are the lawsuits mounting up against him by businesses who say he owes them a pretty penny. Peterson is being sued by a Pennsylvania lender who says he failed to pay back a $5.2 million loan and he’s named as a defendant in two other lawsuits, The Athletic reports.

In one of the suits, the judge directed Peterson to pay a creditor, Democracy Capital Corporation, a Bethesda-based lender, back $2.4 million for money he borrowed in 2016. He also has to cough up $600,000 to yet another creditor, Crown Bank.

Peterson reportedly took out a $2.4 million loan to refinance other debts in May 2016. However, he got injured and was cut from the Vikings, the team he played for at the time and he became a free agent. Therefore, he wasn’t paid his $18 million for the 2017 season. That resulted in Peterson defaulting on his loan, according to reports.

In addition, Peterson borrowed $5.2 million from DeAngelo Vehicle Sales (not a car company) in October 2016 and used $3.1 million of that loan to pay off a debt to Thrivest Specialty Funding. He then paid $1.3 million to Crown Bank.

Peterson juggled borrowing loans with paying off debts but his attorney said the problems run deep.

“The truth behind Adrian Peterson’s current financial situation is more than is being reported at this time,” Peterson’s lawyer, Chase Carlson said in a statement. “Because of ongoing legal matters, I am unable to go into detail, but I will say this is yet another situation of an athlete trusting the wrong people and being taken advantage of by those he trusted. Adrian and his family look forward to sharing further details when appropriate.”

Peterson signed a seven-year $100 million contract with the Vikings back in 2011. He is geared to earn $1.5 million next year and $750,000 the following season from the Washington Redskins.