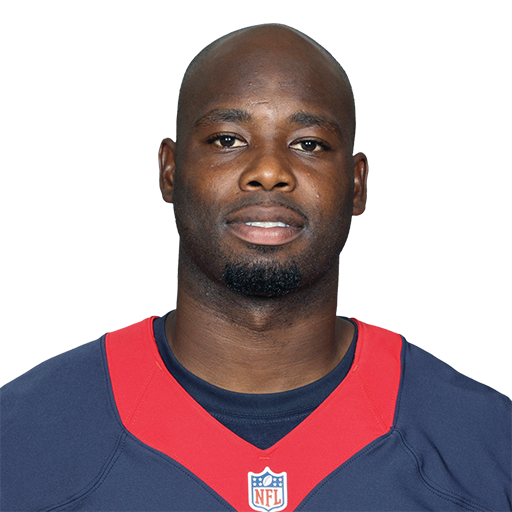 Sometimes it’s difficult for older players to accept lesser roles, but Texans veteran cornerback Johnathan Joseph is at peace with how his career has evolved.

Joseph, who in his 14thseason in the league, isn’t asked to do as much but his contribution on and off the field is still critical to the Texans success.

“When I first came here I was the guy following the No.1 receiver everywhere they went but over time, obviously when get older you can’t do that anymore even though you think you can,” said Joseph, who signed with the Texans as a free agent in 2011 after spending the first six years of his career in Cincinnati.

“But for me, it’s just about being wherever I’m needed. I don’t come in here and demand anything. I play and I try to lead the young guys to go out there and put winning football on the tape.”

Almost as often as you see Joseph making plays on the ball, you see him instructing his younger teammates on the field and on the sideline between possessions. The peer coaching can continue in the locker room like it did following the team’s impressive win over the Atlanta Falcons.

The game had been over for at least an hour and Joseph was still holding court, still imparting knowledge around his locker.

“It’s even more fun because I get to see the young guys go out and make plays,” he said.  “I know how to study, I know how to prepare and do all of those things, but it gives me even more satisfaction when I see those guys taking steps like Lonnie Johnson, who last week took a slant when he was supposed to stay outside and they converted it.

“They did that same slant-flat [against Atlanta] but he recognized it and came back outside and made the tackle. I get satisfaction in seeing guys take steps from one week to the next.”

Texans receiver DeAndre Hopkins can attest to that. Hopkins, who refers to Joseph as his “big brother” because of their South Carolina ties, said the wisdom Joseph shares extends beyond the defensive backs.

“Joe, he is a leader, not just on the football field but in the locker room,” Hopkins said. “He was in the league before me, but since I’ve been in the league, I think every young receiver coming in here he helps them with football, he helps recognize things on the field, things that defenses might do.

“Joe is kind like one of those all-around players that we are very fortunate to have in the locker room.”

He is also a huge presence for the Texans on the field, as well. Corner Bradley Roby now covers the opposing team’s No.1 receiver most of the time, but Joseph will still draw that assignment from time to time and shows that even at 35, he can still hang.

Joseph, who ranks sixth in NFL history in career passes defensed with 188, recorded six tackles and a pass defensed in helping slow Julio Jones and company. It doesn’t appear that it will get any easier with a tough road game against dart-throwing quarterback Patrick Mahomes and the Kansas City Chiefs.

“You always have to have the confidence,” Joseph said. “But this game has no correlation to the next game. Celebrate it and move on from it because it’s a different monster coming up next week. We can’t ride high from this and go up there next week and lay an egg.”