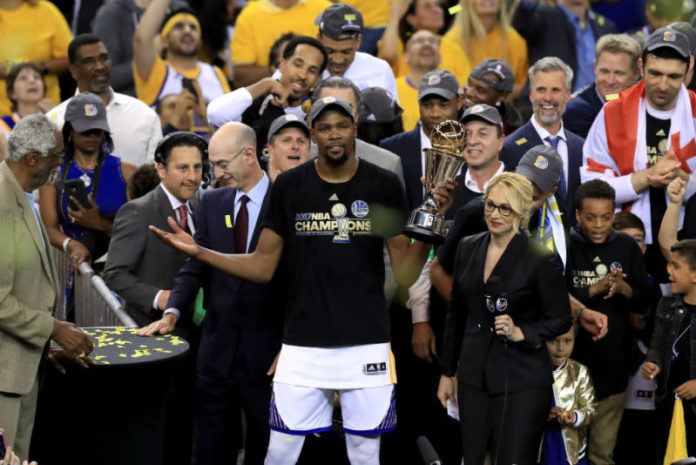 The Golden State Warriors have not made an official decision about whether or not they will be going to Donald Trump’s White House. According to a statement issued by the organization, the newly crowned NBA champs noted that they haven’t even received an invitation from the White House.

“We have not been invited to the White House,” the statement, viewed by the Mercury News, reads. “Today is all about celebrating our championship. We will make those decisions when and if necessary.”

I’m willing to bet that one of two things is going to happen:

Warriors coach Steve Kerr has been vocal about his disdain for the president, Vocativ reports. Earlier this year, Kerr called Trump’s ill-fated “Muslim ban” a “shocking and horrible idea,” adding, “You want to solve terror? You want to solve crime? This is not the way to do it.” In May he accurately called Trump a “blowhard” who “has no regard for compassion or empathy.”

Several Warriors players, including stars Stephen Curry and Draymond Green, have also been vocal about their distaste for President F**k Face.

Amid rumors that the Warriors planned on snubbing a presidential invite to the White House, House Minority Leader Nancy Pelosi offered to host the NBA champs at the Capitol.

The @Warriors' leadership is inspiring. I'd be honored to welcome the team to the U.S. Capitol. #DubNation

So we’ll all be waiting to see what the Warriors brass decide, but if they receive in invite to the White House, I highly doubt that any Warriors will accept.

The Golden State Warriors beat the Cleveland Cavilers in just five games, and the entire team is the real MVP as reports have surfaced that the 2017 NBA champs won’t be making the customary trip to the White House because the president is a xenophobic, racist dirtbag.

Josh Brown of CNBC’s The Halftime Report tweeted shortly after the Warriors won their second title in three years that the team decided unanimously to skip the traditional championship visit to Washington because of the president’s hatred of all things that basketball represents, like teamwork and black men and smiling.

“The Warriors will be the first team to boycott a visit to the White House following a championship. After the New England Patriots won the Super Bowl earlier this year, some members of the team skipped the visit, but the likes of head coach Bill Belichick, owner Robert Kraft, tight end Rob Gronkowski and others still attended,” TSN reports.

The Pittsburgh Penguins recently won their second Stanley Cup Championship Sunday, and there has been no word on whether the team plans to make a trip to the White House.