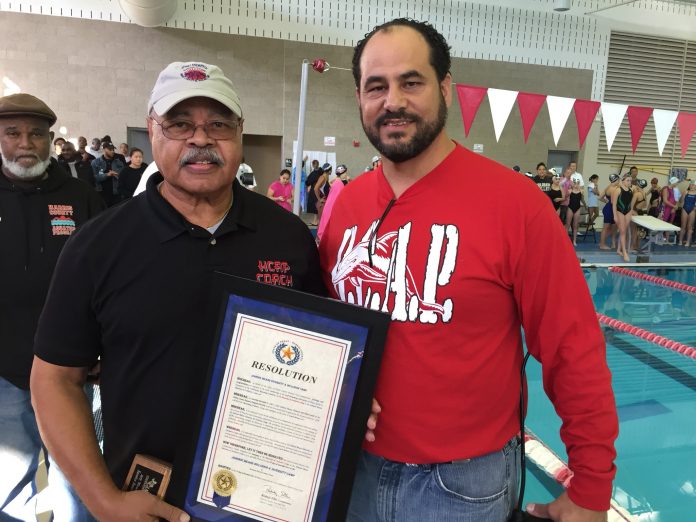 Johnnie Means has spent nearly a lifetime dedicated to the sport of swimming, as both a groundbreaking coach and activist of social change.

As a coach at Texas Southern University, Means led the swim team to prominence for nearly 40 years.  He currently serves as director of the Harris County Precinct One Aquatics Program, which he started with his former swim student, the late County Commissioner El Franco Lee. He is a member of the Texas Swimming & Diving Hall of Fame.

Means started out as an all-state swimmer at Yates High School and went on to Southern University to compete on a scholarship. 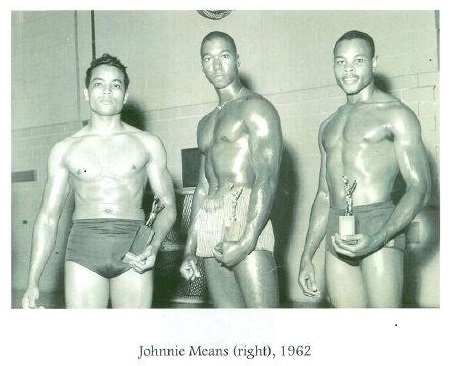 He began his career in the 1960s when he discovered a passion for teaching. His mentor, the late Raymond Daniels, told Means that he had a natural skill for teaching young swimmers.  As a result, Means worked as a water safety instructor at the Amateur Athletic Union (AAU) competitive swim program through the South Central YMCA, which was then a new, predominantly Black location.

During Means’ time at the Y, the national branch of the YMCA accidentally sent the South Central location an invitation to compete in its yearly swim meet, not realizing that it was an all-Black program, the first of its kind.

The local meet was to be held at the Shamrock Hilton Hotel, which at the time had a segregated pool. When the hotel learned that the South Central team was all-Black, it notified a YMCA counselor, who requested that South Central drop out of the meet.

Means refused to drop out of the meet and the entire competition was cancelled. Means found an ally in a swim team parent, Marge Stewart, who was affiliated with the NAACP. Means and Stewart put pressure on the sanctioning body, the AAU, through a letter that stated the AAU should not sanction any meets that Black children qualified for but were denied participation. 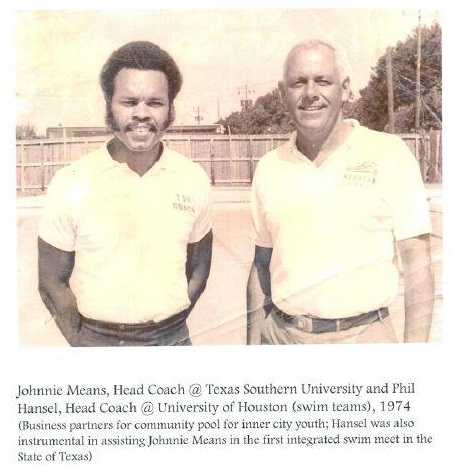 The AAU responded by calling the organizer of the YMCA local meet and notifying them that it would no longer sanction meets in which qualified Black children were not allowed to compete.

By the early 1990s, Means, along with swimming enthusiasts Thurman Robins, Tommy Jackson and Jim Ellis, started a program with the Olympic training center to have a clinic for the top Black swimmers in America.

Here is a one-on-one with Means:

Defender: How did you get into the sport of swimming?

Means: It was kind of a challenging thing. In high school, I played a little football, but swimming was something that Black people didn’t do that much, and when I found out that I had a good aptitude and ability to adapt to the sport of swimming. That is when I was encouraged by a guy named Raymond Daniels to get into it when he saw I had the ability. I also liked that it was a challenge for me because a lot of Blacks weren’t into swimming at the time.

Defender: What made you love coaching swimming?

Defender: What were some of the challenges you faced?

Means: Swimming is a sport you have to start very young in, usually 8, 9 or 10 years old. And I had to educate the parents about the importance of letting their kids come to the pool every day to work and be proficient in the sport of swimming…The prejudices of the swimming world in the early ’60s were also an obstacle. They didn’t want us at the meets, so we would hear the heckles and remarks at the kids.  I had to tell my kids to be strong as young teenagers going into those meets because they were only 8 and 14 years old. I would tell them to ignore it, we are here to swim and show our talents and that is what we did at the time.  Another unfortunate challenge today is that Black people have not taken advantage of the free swimming programs we have created for them while other minority groups have.

Defender: What are your thoughts on the sport today?

Means: When I see the kids performing at the top level I don’t think they know what they are doing and the sacrifices that were made to make it possible for them. Some of them think that it is an entitlement that they have, but they have gotten that entitlement as a result of people in the past who have made a lot of sacrifices to get them where they are.  We also just don’t have enough Black people who are swimming. I am proud of what we have done and some kids have shown that we have the capabilities of being on that top level in world-class swimming, but we have so many other little kids in these projects and ghettos that would do the same thing, but they are not getting there because they have not been introduced to the sport.

If you look at the whole scheme of things, we are still a long way behind in the sport of swimming as well as many other aspects of our lives in this society.  We think that we have arrived, but as we all know in this day and time, things have gone full circle and are shown we haven’t made the progress that we thought we had made. That ugly prejudice and bigotry will raise its head periodically and let us know that it is still there and we have a lot of work to do.