DefenderNetwork.com
Home SPORTS Professional Sports Tale of the Tape: How Texans line up against Chiefs 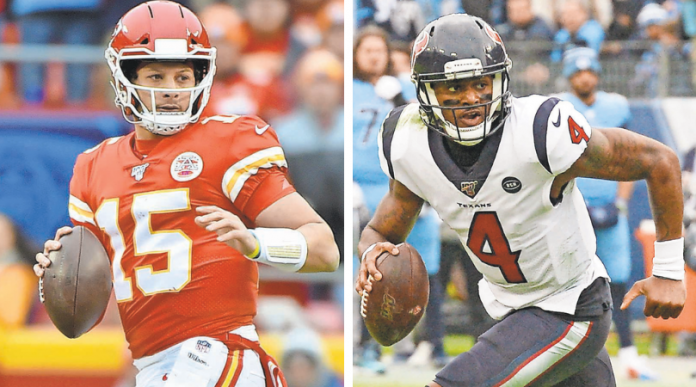 The Texans quarterback is fast emerging as one of the most exciting playmakers in the NFL this season. It doesn’t matter if Watson has to win games with his feet or his arm – as he did both in one single play in overtime to lift the Texans over Buffalo in their AFC Wild Card match-up.

The reigning MVP hasn’t had quite the season he had in 2018 – his first year as the Chiefs starter – but Mahomes is still one of the most dangerous passers in the game because of his ability to move around and buy time to find the open receiver. He has been slowed some this season because of early injuries to his ankle and knee but he is past that.

The All-Pro receiver is really the heart of the Texans offense. As he goes, so does the offense. Hopkins was shut out in the first half against the Bills and the same
went for the entire offense. Hopkins is one of the best deep-threat receivers in the game.

Watkins hasn’t put up great numbers really since the beginning the season, but he is still a deep threat who could take advantage of an inconsistent Texans secondary. Watkins doesn’t always run the most crisp routes but if he can get open he will make something happen.

It seems almost unfair to compare Fells to his Kansas City counterpart, but make no mistake the journeyman tight end has been a huge part of the Texans offense this season. Fells has found a way to come up with timely explosive plays this season and has become a favorite check down option of Watson’s, especially in the red zone.

In this day of versatile, athletic tight ends, Kelce is simply the best among the best of them. His superior route running has made the Pro Bowl tight end the Chiefs leading receiver with 97 receptions for 1,229 yards and five touchdowns this season. Kelce is a match-up nightmare for most defenses.

If you didn’t understand how much of an emotional leader Watt can be and just the impact he can have on the game all you had to do was witness his game-changing sack against the Bills. Not only did he awaken the defense but the offense got going too after being dormant in the first half. Watt’s earlier-than-expected return from a pectoral tear has already proven key.

Those who thought Suggs’ days of being an impact player were behind him better think again. Suggs, who began the season in Arizona, joined the Chiefs for the final two games of the regular season and quickly displayed his ability to get after the passer and to make impact plays on defense. Suggs spent most of his future Hall of Fame career in Baltimore and gives the Chiefs defense some of the grit and swagger it has needed.