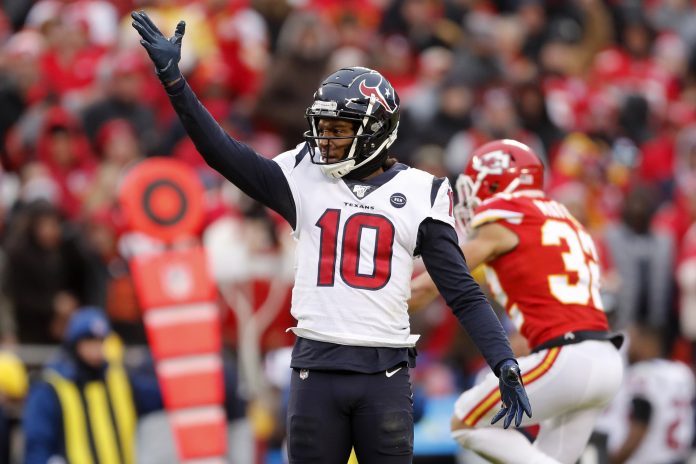 The Houston Texans apparently have no intentions of easing into the new NFL calendar year.

On Monday, the football world was caught completely off guard when NFL sources confirmed the Texans are trading star receiver and their best playmaker DeAndre Hopkins to the Arizona Cardinals. The Texans are sending Hopkins and this year’s fourth-round draft pick to the Cardinals in exchange for backup running back David Johnson and a second-round draft pick in 2020 and a fourth rounder in 2021 in easily one most stunning moves in the history of the Texans.

Hopkins, a former first-round pick of the Texans, has been one of the team’s strongest leaders on and off the football field. In his seven seasons the three-time All-Pro and four-time Pro Bowler caught 632 passes for 8,602 yards and 54 touchdowns.

This is the second season in a row that Texans head coach/general manager Bill O’Brien has traded away an elite player. He sent elite pass specialist Jadeveon Clowney to Seattle during a contract dispute last summer.

But unlike Clowney, the Texans had Hopkins locked up in a cap friendly deal for three more years, which makes this move even more curious. Hopkins and the Texans agreed to a five-year, $81 million contract in 2017 that had $40 million remaining to be paid.

The team cannot comment on the trade until the new league calendar year begins Wednesday, but Hopkins sent a statement to Fox 26 News in which he took the high road, saying it wasn’t personal but business while he also showed love to the city of Houston where he had become as known for his charitable giving and work in the community as the balls he caught.

“I would like to say Houston helped create not just a football player, but a man,” Hopkins said in an interview with FOX 26 Sports. “Houston gave me opportunities in life that I would have never got in a lot of places to better myself. I want to thank the city of Houston for always supporting the organization, no matter what happened and supporting us players through the ups and downs.

“Houston, always know there will be love in my heart despite this situation…It’s a business and there’s nothing personal about it. I gave it all I had. I wouldn’t take anything back. I don’t regret anything that’s happened so far in my career being a Houston Texans.

“Now it’s a new chapter in my life I’m looking forward to and very excited to be part of the Arizona Cardinals. All of the Houston fans that loved DeAndre Hopkins, make sure they still support DeAndre Hopkins.”

Deshaun Watson loses his top receiving threat while second-year Cardinals quarterback Kyler Murray gets a sure-handed receiver who remains one of the top targets in the game.

The departure of Hopkins leaves Will Fuller V and Kenny Stills as the Texans top returning receiving threats.

Johnson, who eventually lost his starting job to Kenyan Drake, rushed for 345 yards on 94 carries for the Cardinals last season. He is expected to become the Texans top running back.