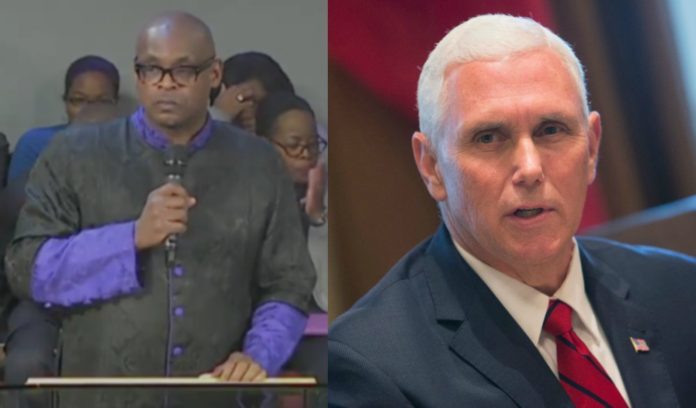 With Vice President Mike Pence sitting in the pews, a Maryland pastor called out Donald Trump this past Sunday over his “sh**hole countries” comment directed at Haiti and other African nations.

“I stand today as your pastor to vehemently denounce and reject any such characterizations of the nations of Africa and of our brothers and sisters in Haiti,” Watson said to the congregation.

“And I further say: Whoever made such a statement, whoever used such a visceral, disrespectful, dehumanizing adjective to characterize the nations of Africa, whoever said it, is wrong. And they ought to be held accountable.”

Watson did not use Trump’s name when speaking, but it was clear who he was talking about as Pence and his wife looked on.

Watson says that he felt “led by God to do it,” and added that many in his congregation come from Haiti and African countries.

His harsh words come in response to reports that Trump told lawmakers in the immigration meeting that he preferred immigrants from countries such as Norway over those coming from “sh**hole countries” like Haiti and those in Africa.

History of ‘Trumplash’ for Pence

This isn’t the first time Pence has had to deal with backlash for his boss. He faced it head on during the presidential transition.

In 2016, when going to see “Hamilton” on Broadway, he was booed before the show even started. At the end of the performance, star Brandon Victor Dixon, who played Vice President Aaron Burr, read a statement directed at the VP-elect that said, “We are the diverse America who are alarmed and anxious that your new administration will not protect us.

“We truly hope this show has inspired you to uphold our American values and work on behalf of all of us,” Dixon added.

“Today we remember the legacy of MLK Jr.,” Pence posted on social media, along with video of him laying a wreath at the King Memorial in Washington.

“His memorial stands tall, but the real memorial to Dr. King resides in the hearts of all who strive for a more perfect union. To honor him, let’s rededicate ourselves to the cause Dr. King selflessly advanced, that all men are created equal.”