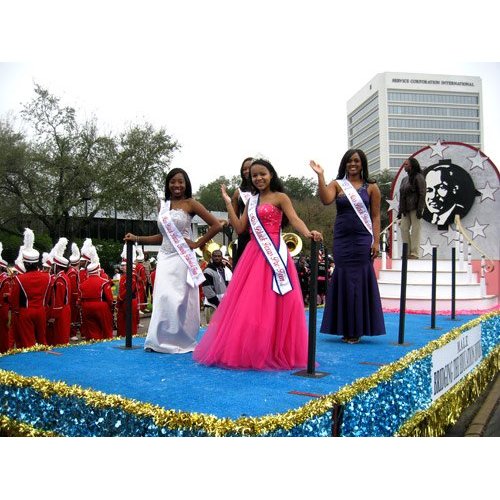 At the same time, less than 2 miles away in Midtown, the newer MLK Grande Parade cut a straight path down San Jacinto Street. People lined up two and three deep on the sidewalks to watch the stream of dancers, cheerleaders and three dozen marching bands, including Booker T. Washington High School’s Baby Ocean of Soul.

For two decades, the festive events have observed the same leader’s legacy, but dual Martin Luther King Jr. Day parades have become a spectacle of disunity too heavy for Houston to bear any longer, Mayor Sylvester Turner declared before the processionals rolled.

In his strongest public remarks to date and after two years at the city’s helm, he has had enough.

“This division in our city must come to an end, and it’s got to come to an end right now, and we are the ones that must make the decision,” the mayor said Monday at the annual King Day memorial scholarship breakfast downtown – raising his voice as the rousing applause and cheers intensified.

“That’s not what Dr. King stood for,” Turner shouted from the podium. “A house divided cannot stand.”

Speaking to nearly 1,000 attendees, the mayor called on residents, elected officials and community leaders “to stand behind one parade that the city and I will endorse.”

Over the weekend, the mayor shared similar sentiments with leaders of the Greater Houston Frontiers Club, which hosted Monday’s breakfast at the George R. Brown Convention Center, and said a more detailed statement will be forthcoming.

“In fact, before the week is up, I am going to announce where the city is going to be, and I am going to ask all the sponsors, the supporters, elected officials to line up behind one,” Turner said. “We cannot go forward divided and confused.”

Upon leaving the breakfast, the mayor appeared in the Black Heritage Society’s “original” parade.

Even before the federal holiday came into existence in the 1980s, Houston originated the concept of hosting a parade on King’s birthday.

The slain leader’s pastor-father known as “Daddy King” visited the Bayou City in the mid-1970s to discuss a grassroots commemoration with the Black Heritage Society and its founder, anti-poverty activist Ovide Duncantell.

In 1978, the group hosted its first parade as a beacon of education and inspiration. The people involved had connections to community organizations committed to advancing King’s ideals of social and economic justice.

In 1995, a society associate named Charles Stamps left the group to start the MLK Grande Parade under a new organization called the MLK Parade Foundation. That presentation has become a glamorous pageant, in contrast to the original parade, featuring celebrity grand marshals and financed by corporate sponsors.

“I really don’t understand the differences between the two, to be honest,” said Anisha Ogbor, who brought her 6-year-old son, Jaxon, to the downtown parade. “I absolutely think there should be just one.”

Floyd Newton attended the Midtown parade for the second year in a row.

“The difficult part was not whether or not to attend the parade,” he said. “It was which parade to attend.”

He said he’s glad the mayor is pushing for a combined effort.

“I think the majority of us would like to have one event,” Newton said. “One parade would definitely send the message that we are unified in our celebration.”

People at both parades had mostly practical reasons for choosing one celebration over the other. For Tamela Lewis, who drove her two children from Rosharon, downtown promised easier access to parking. Alvin Gray chose the Grande Parade because Midtown is more familiar to him.

Shelton and Sandra Ducksworth brought five of their seven offspring to the downtown parade, where they found space on the sidewalk across from Minute Maid Park.

“Today is really about what Dr. King wanted it to be about: a city of love, all different ethnicities out here enjoying each other – no fussing, no arguing,” said Shelton Ducksworth, who would like to see an extra-long combined processional that could last all day. “We’re just here to appreciate what Dr. King fought for and what we continue to fight for today.”

Turner’s efforts would not be the first to try to resolve the conflict.

Along with street names across the nation, parades became popular ways to honor the civil rights leader who was slain in 1968. Most are scheduled on King’s birthday, which was first celebrated as a federal holiday on the third Monday in January 1986.

At its founding, the Black Heritage Society had three goals: Name a street for King, work with other organizations to have his birthday – Jan. 15 – declared a national holiday, and erect a “magnificent statue” in the leader’s honor. The trio of aims was fulfilled in 2014, when the society unveiled an 8-foot bronze sculpture of King as the centerpiece of a memorial plaza in MacGregor Park at Martin Luther King Jr. Blvd. and Old Spanish Trail.

In 2005, the Houston City Council revised its parade ordinance to allow one downtown processional per day. The updates were made, in large part, to address the then-decade of dueling King Day parades.

A federal court order allowed both to proceed downtown on the holiday in 2007: the Grande Parade in the morning and the Black Heritage Society in the afternoon.

A coin toss determined who held a parade downtown in 2008. The Black Heritage Society won and the Grande Parade proceeded on Allen Parkway.

This week, both were held at the same time in close proximity – downtown and Midtown – as the city permitted.

Turner said that he has “visited” with leaders of both parade organizations and “just could not pull them together” to reach a compromise.

“I’m going to ask the people to decide,” the mayor said. “We must choose and we must decide to stand behind one and only one.”